Update Required To play the media you will need to either update your browser to a recent version or update your Flash plugin.
By Bryan Lynn
24 October, 2018


Google says it is deeply involved in developing artificial intelligence, or AI, to help doctors identify and treat disease.

In one case, Google reported AI had examined images to diagnose diabetic eye disease with equal accuracy to doctors. Other tests showed that machine learning can be used to study massive amounts of patient data to predict future medical events. 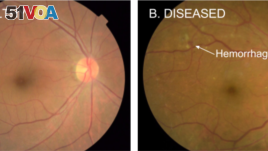 Google deep learning methods are used to detect diabetic eye disease. The image on the left is a healthy retina, while the one on the right shows signs of diabetic disease. (Google AI)

Now the company has published two new studies showing a high level of success in identifying one of the deadliest forms of cancer. Google carried out tests with researchers from the Naval Medical Center San Diego. Google reported the findings on its AI website and results were also published in scientific journals.

The tests involved machine learning methods to examine digitized images of body tissue samples for signs of metastatic breast cancer. Metastatic means cancer that has spread from its main area to other parts of the body.

This kind of cancer is among the most difficult to identify and treat. Metastatic breast cancer is also one of the deadliest, causing an estimated 90 percent of all breast cancer deaths worldwide.

In metastatic breast cancer patients, the cancer often travels to nearby lymph nodes. Usually doctors examine lymph node tissue samples under a microscope to see whether cancer is present.

It is important for doctors to identify metastatic cancer as quickly as possible to prevent further spreading. The process is also important to help make decisions about treatments.

Google notes that previous studies have shown that up to one-fourth of metastatic lymph node classifications end up being changed after a second examination. In addition, studies show that small metastatic material can be missed up to 67 percent of the time when examinations happen under extreme time restrictions.

Google says it created a mathematical algorithm that greatly improves this accuracy rate. The algorithm, called Lymph Node Assistant, is trained to find characteristics of tissue affected by metastatic cancer. When the system examined tissue images, it was able to differentiate between metastatic cancer and non-cancer 99 percent of the time, Google reported.

In addition, the company said the Lymph Node Assistant was highly effective at finding the positions of the cancers. Some of these positions would be too small for doctors themselves to identify, Google added.

The research also showed that the algorithm method can reduce the usual time needed to examine a sample by about 50 percent.

The system was designed with extreme sensitivity to "exhaustively" examine every part of a tissue sample, the researchers wrote in their paper.

AI not meant to replace doctors

But Google makes clear the AI-based system is not meant to replace the work of medical professionals. Instead, it is designed to reduce the number of false identifications and help doctors work faster and more effectively.

The studies suggest that "people and algorithms can work together effectively to perform better than either alone," Google said in a statement.

The company says that clearly more AI research and experiments will be necessary to further progress in the fight against breast cancer. But it is hopeful that "deep learning technologies and well-designed clinical tools" can be continually developed to improve accuracy and availability for patients worldwide.

diagnose – v. to identify what is wrong with a sick person

lymph node – n. any one of many rounded masses of tissue in the body through which lymph passes to be filtered and cleaned

classification – n. the process of putting people or things into groups by their type, size, etc.

characteristic – n. typical or obvious quality that makes one person or thing different from others