Update Required To play the media you will need to either update your browser to a recent version or update your Flash plugin.
By Bryan Lynn
27 June, 2017


The European Commission (EC) has fined Google $2.7 billion for unfairly influencing online search results for its own businesses.

It was the largest fine ever ordered by the EC against a single company in an antitrust case. Antitrust laws are designed to protect trade from unlawful restrictions and unfair business activities.

European Union (EU) investigators said that in online searches with Google, the company listed links to its own online shopping services above those of competitors.

"What Google has done is illegal under EU antitrust rules," said European Competition Commissioner Margrethe Vestager. "It denied other companies the chance to compete on the merits and to innovate," she added.

Google, which operates under parent company Alphabet, denied any wrongdoing.

"We respectfully disagree with the conclusions announced today," chief lawyer Kent Walker said in a statement.

Google said research shows users of its website like when they link directly to products they are looking for.

"When you shop online, you want to find the products you are looking for quickly and easily," Walker said. "And advertisers want to promote those same products. That is why Google shows shopping ads, connecting our users with thousands of advertisers, large and small, in ways that are useful for both."

The EC investigation lasted about seven years. It was launched after consumer websites accused Google of unfair business practices. 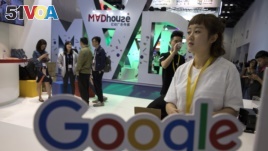 Visitors talk to staff members at a Google stand during the Global Mobile Internet Conference (GMIC) in Beijing, China, April 28, 2017. Google's search engine and email service remains blocked in mainland China but Chinese companies make use of its ad se

In addition to the fine, the company is required to develop a plan to give competing shopping services equal treatment. Google has 90 days to stop suggesting its own links over those of competitors. If it does not make changes, it faces fines of up to 5 percent of Alphabet's average daily worldwide earnings.

The EU consumer group BEUC praised the fine. "This decision is a game-changer," said director general Monique Goyens. "The Commission confirmed that consumers do not see what is most relevant for them on the world's most used search engine, but rather what is best for Google."

In the past, the U.S. Federal Trade Commission (FTC) investigated Google for possible antitrust practices. Part of that case also involved accusations that the company used its search engine to support its other businesses.

The company ended up reaching a settlement with the FTC in 2013. At that time, the FTC said Google had "agreed to change some of its business practices to resolve (FTC) concerns that those practices could stifle competition." Some of the changes related to Google's online search advertising.

Other American technology companies have also faced legal troubles in Europe. Facebook was recently fined $122 million for giving misleading information to officials during its purchase of messaging service WhatsApp in 2014.

In 2016, the European Commission demanded that Apple pay about $14 billion in back taxes. The EC said Apple owed the money because it had received unfair tax assistance from Ireland that amounted to a form of "illegal state aid."

Apple, one of the world's biggest companies, denied any wrongdoing and appealed the case. It said the EC findings were based on "fundamental errors" made during the investigation. The company criticized the commission for not explaining exactly how it reached its ruling.

The EC said Ireland gave too many tax breaks to Apple. It said this resulted in an effective tax rate on Apple's European profits of just 0.005 percent in 2014.

Bryan Lynn wrote this story for VOA Learning English, based on reports from AP and Reuters. George Grow was the editor.

innovate – v. do something in a new or different way

promote – v. help or develop something

consumer – n. someone who buys or uses goods or services

relevant – adj. how something relates to something else

fundamental – adj. relating to the main part of something

shopping – adj. of or related to buying goods or products