Update Required To play the media you will need to either update your browser to a recent version or update your Flash plugin.
By Ashley Thompson
27 September, 2018

The search engine celebrated with a special "Google Doodle" video on its U.S. homepage. The fun, animated video noted some of the most common Google searches throughout the company's history.

One popular search from 1998, its first year in operation, was a simple question: "What is Google?"

Other popular searches in the last 20 years include "What will happen on Y2K" -- the start of the year 2000 -- "is Pluto still a planet," "what is a selfie," and, more recently, "show me pictures of cute animals."

Along with the special Doodle Thursday, Google also took a look back at some of its most memorable Doodles. They include its first animated, or moving, Doodle on Halloween in 2000; a quickly drawn Doodle to mark the discovery of water on the moon; and one on Earth Day in 2015 that featured the first Doodle quiz. 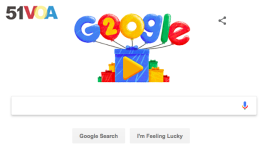 Google also created a special 20th anniversary website, 20years.withgoogle.com. The site tells visitors interesting search trends throughout Google's history. For example, David Beckham was the most-searched soccer player from 2000 to 2004. And Jessica Alba was the most-searched female actor from 2005 to 2007.

Two doctoral students from Stanford University, Larry Page and Sergey Brin, launched the search engine in September 1998. Their aim was to make the world's information more useful and more organized.

Today, users can search in over 150 languages in more than 190 countries. And Google is the most visited site in the world, according to Alexa Internet.

Ashley Thompson wrote this article. Caty Weaver was the editor.

memorable - adj. very good or interesting and worth remembering

according to - prep. as stated, reported, or recorded by (someone or something)