Google Finds Out What Americans Are Dressing Up as on Halloween

Update Required To play the media you will need to either update your browser to a recent version or update your Flash plugin.
By Ashley Thompson
29 October 2021


Here is a question for our listeners: What do witches, rabbits and dinosaurs have in common?

The answer? They are the top three most popular Halloween costumes this year in the United States. That information comes from data gathered by the Google News Initiative. 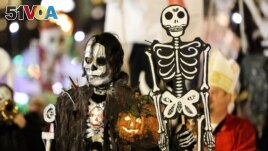 A special website called "Google Frightgeist" provides a look at the 500 most popular costumes this year nationwide. It also lets users know what costumes they are likely to see where they live on Halloween night.

Rounding out the top five most-searched costumes this year are the superhero Spider-man and Cruella De Vil, a dog-hating character from the Disney movie The Hundred and One Dalmatians. The 2021 films Cruella and Spider-Man: No Way Home are surely behind the popularity of these costumes.

Frightgeist offers more than just lists of the year's most popular costumes. It also aims to help people who do not yet know what they are going to dress up as for Halloween. And it provides suggestions for people who hope to stand out with unusual and rare costume choices.

Users can choose "show me something less popular" or "surprise me" to get truly unusual costume ideas.

For example, if you choose "witch" on the website but are looking to dress up as something less common, Frightgeist suggests ideas like "Tin Man" and "Candy Corn." The Tin Man is a character from the film and book The Wonderful Wizard of Oz. Frightgeist says it is the 339th most popular costume in America. It notes that you have a "shockingly low chance of running into another Tin Man costume at a party." Candy corn is a sweet food that looks like a piece of corn. It is a common thing to eat during the Halloween season. But it is a decidedly uncommon costume.

The site's "costume map" gives users a look at the most popular costumes in cities across America. For example, the top costume around Charleston, South Carolina, is an astronaut. In the northernmost part of Maine, an elephant appears to be a popular choice. And in Topeka, Kansas, you might find a frightening number of zombies wandering the streets on Halloween.

To see more costume information and to get ideas for yourself, you can visit frightgeist.withgoogle.com.

witch –n. a woman who is thought to have magic powers

costume –n. the clothes that are worn by someone (such as an actor) who is trying to look like a different person or thing

stand out –v. to be easily seen or noticed

zombie –n. a dead person who is able to move because of magic