Update Required To play the media you will need to either update your browser to a recent version or update your Flash plugin.
By VOA
07 June, 2018

The search engine Google is honoring the life of an American doctor who developed a system for measuring a newborn baby's health.

Virginia Apgar is the subject of the Google home page's latest Doodle. Thursday would have been Apgar's 109th birthday. 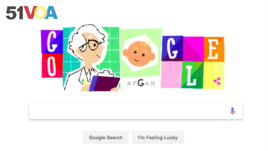 As Google explains, Apgar's "presence can still be felt in delivery rooms across the globe."

As a medical student, Apgar noted that a number of babies that had seemed healthy at birth were dying soon after leaving the hospital. This was because there was no commonly used method for measuring newborn health.

In 1952, she created a life-saving test. This five-step test has doctors examine the appearance, pulse, grimace, activity, and respiration of newborns. The test is easy to remember. The first letter of each step spells Apgar: A-P-G-A-R.

Doctors score each part score of zero to two, with the highest total score being 10. They examine the newborns one minute after birth and then again five minutes after birth. The scores help doctors identify whether a baby has health issues requiring extra care.

The APGAR test soon spread in America and around the world. It is still widely used today.

Apgar's life included many other successes. In 1949, she became the first woman to be named a full professor at the medical school she attended, Columbia University's College of Physicians and Surgeons, in New York City.

Later, she led the birth defects department at the organization known today as the March of Dimes.

In 1995, she was admitted into the National Women's Hall of Fame.

delivery - n. the act or process of giving birth

globe- n. an object that is shaped like a large ball with a map of the world on it

pulse - n. the regular movement of blood through your body that is caused by the beating of your heart and that can be felt by touching certain parts of your body

grimace - n. a facial expression in which your mouth and face are twisted in a way that shows disgust, disapproval, or pain

respiration - n. the act or process of breathing