Google Inspires Entrepreneurs Around the World

Update Required To play the media you will need to either update your browser to a recent version or update your Flash plugin.
By Dan Friedell
21 January, 2017


In the late 1990s, Google was just a start-up company operating out of a garage in Palo Alto, California. Co-founders Larry Page and Sergey Brin started the company while studying at Stanford University.

Google's founders and its employees, then, understand some of the challenges that entrepreneurs around the world may face.

An entrepreneur is a person who starts a business. They must be willing to risk financial loss in order to make money. 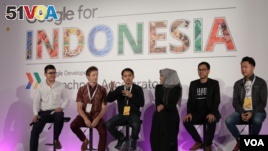 Mary Grove is the director of a program called Google for Entrepreneurs.

She said, "It's never been easier, in some ways, to start a company and your audience has never had the potential to be more global."

Google for Entrepreneurs has opened campuses around the world, in cities like London, Madrid, Sao Paulo, Warsaw, Tel Aviv and Seoul.

Entrepreneurs in each city can use Google's buildings without paying. Google provides them with workspaces and meeting spaces. Entrepreneurs can work with each other and learn from people who are more experienced in business.

Yeram Kwon is the head of a company in South Korea. Her business is called I.M. Lab. It makes a product that helps people learn to perform the lifesaving technique called CPR.

She said she has learned how to solve some of her business's problems by attending Google events in Seoul.

Hilla Brenner is an experienced entrepreneur in Tel Aviv, Israel. She started two companies. She also invests in other companies and mentors people trying to start businesses.

She was nine months pregnant when one of her businesses received a $5 million investment. When her baby was born, she took time off from work, but still wanted to be involved in business. Brenner told Google there should be a program for new mothers who want to learn about business while on maternity leave.

So Google created Campus for Moms, a nine-week program for new mothers who are interested in starting their own businesses. Campus for Moms started in Tel Aviv. It is now available at other locations around the world. New parents can bring their children with them to the meetings.

Outside of its own buildings in these cities, Google provides financial support and resources for partner organizations around the world.

Building partnerships is a way for Google to spread the idea of entrepreneurialism around the world. Google can use its network to help find people who want to invest in start-up businesses.

Those people need to be ready to take risks. That is something Kwon said makes some Koreans uncomfortable.

"Most Korean people think that it is much safer to work for big companies like Samsung and LG," she said.

Google for Entrepreneurs says it has connected with over 300,000 entrepreneurs in 140 countries. Together, they have raised $1.8 billion and helped create more than 20,000 jobs.

Elizabeth Lee wrote this story for VOANews. Dan Friedell adapted it for Learning English. Ashley Thompson was the editor.

Do you feel comfortable taking risks in business? We want to know. Write to us in the Comments Section or on 51VOA.COM.

mentor – n. someone who teaches or gives help and advice to a less experienced and often younger person

maternity leave – n. time away from for a new mother