Update Required To play the media you will need to either update your browser to a recent version or update your Flash plugin.
By Christopher Jones-Cruise
24 February, 2017


The owner of technology company Google has reported progress in its plan to offer Internet service to rural areas around the world.

Google's parent company, Alphabet, calls the plan "Project Loon." Its goal is to increase access to the billions of people currently without internet connectivity.

Alphabet has no plans to use traditional wiring, which can be costly. Instead the idea is to float huge balloons about 20 kilometers above the surface of the Earth. 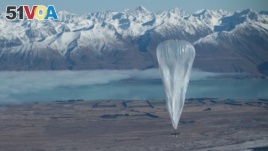 This handout photo taken on June 15, 2013 and received from Google on June 16 shows a Project Loon high altitude ballon sailing over Tekapo in Southern New Zealand.

The balloons would act like telecommunications satellites, providing internet service to the rural areas. The huge objects would ride air currents to either stay in place or move to another position high in the skies.

At first, the idea was to have a large number of balloons circling the planet. One balloon would move away from an area while another arrived to guarantee service in the affected areas.

But Alphabet announced it has found a way to make balloons float over one area for an extended period.

In a statement released online, the company said its software "can now send small teams of balloons to form a cluster over a specific region where people need internet access. This is a shift from our original model...in which we planned to create rings of balloons sailing around the globe, and balloons would take turns moving through a region to provide service."

The company said the discovery was made during tests of balloons launched from the island of Puerto Rico to float in Peruvian airspace. The company said some of the balloons stayed in the same area for as long as three months.

The company said the discovery should speed up the project and reduce costs: "We'll reduce the number of balloons we need and get greater value out of each one."

But Project Loon workers must still find ways to increase the life of the balloons. A British Broadcasting Corporation report says the longest service for a single balloon was 190 days.

Google has also explored the idea of providing internet service to rural areas using solar-powered drone aircraft. But it cancelled that project because of technological barriers and high costs.

VOANews reported on this story. Christopher Jones-Cruise adapted the story for Learning English. George Grow was the editor.

access – n. permission or ability to enter or pass through a place; ability to communicate with a person or thing

specific region – n. a given area

shift – n. a move or change

solar – adj. of or related to the sun

aircraft – n. something that flies; a vehicle for traveling through the air