Update Required To play the media you will need to either update your browser to a recent version or update your Flash plugin.
By Bryan Lynn
11 October, 2017


American company Google recently announced the release of its Google Pixel 2 phone and other products that work together with the phone.

One of the new products is a pair of wireless earphones Google calls Pixel Buds.

The earphones are seen as the company's answer to competitor Apple's popular AirPod headphones.

At a launch event on October 4, Google said its Pixel Buds were built to provide high-quality sound and hands-free use. All of their operations can be controlled by simply touching the right earphone.

Once the headphones are paired with a Pixel phone, its many features can be used through the Pixel Buds.

One example is Google Assistant, the company's artificial intelligence, or AI, service. Users can now talk directly to Pixel Buds to ask Google Assistant questions, get information or other help. This can all be done without touching the telephone. A woman holds up the Google Pixel 2 phone, left, next to the Pixel 2 XL phone at a Google event at the SFJAZZ Center in San Francisco, Wednesday, Oct. 4, 2017. (AP Photo/Jeff Chiu)

The Pixel Buds also can work with Google Translate, the service that provides words and expressions in over 100 languages.

Google product manager Juston Payne demonstrated this feature during the launch event. He was able to talk with someone whose native language is Swedish.

When the person spoke Swedish into the Pixel Buds, the phone's speakers provided the translation in English. The English speaker's response was then translated in real time into Swedish and heard through the Pixel Buds. 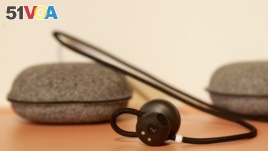 Juston Payne said the feature was created to provide a more natural language experience for users of Google Translate. He added that it was "like having a personal translator by your side."

Pixel Buds are made in three colors: Just Black, Clearly White and Kinda Blue. They come with a charging case that Google says provides up to 24 hours of listening time.

Pixel Buds are selling for $159 and can be ordered now. They will be available, beginning in November, in six countries: Australia, Britain, Canada, Germany, Singapore and the United States.

Bryan Lynn wrote this story based on information from Google. George Grow was the editor.

task – n. piece of work given to someone to complete

feature – n. an interesting or important part of something

pair – n. two things designed to be used together

response – n. a reaction or answer