Update Required To play the media you will need to either update your browser to a recent version or update your Flash plugin.
By Ashley Thompson
13 March, 2019

The free app, called Lookout, is currently available to users in the United States who own a Google Pixel device. The company says it hopes to bring Lookout to more devices and additional countries soon.

The app was first announced at Google's I/O developer conference in May 2018. Since then, the company says it has been testing and working to improve the quality of its results.

The app uses technology similar to Google Lens. That product uses machine learning to recognize text and objects through a device's camera. Users can then receive information about or take actions related to the text and recognized objects.

Lookout builds on this same technology, but aims to provide assistance to people who are blind or have low vision.

The app uses a device's camera to recognize text and objects and then provide voice descriptions about what it sees.

Lookout is not designed to describe everything, but instead seeks to search out things that people would most likely care about. The app can learn to judge what things are most important to a person over time.

Google says the app operates best when the user wears a device around the neck or inside a pocket, with the camera lens pointed outward.

Lookout has three main settings for people to use.

The Explore setting is designed to provide assistance for people carrying out daily activities or for identifying things in new places. A Shopping setting can capture products and help users identify their money. The Quick Read setting can help users go through their mail, read signs or identify other printed materials.

Users can control parts of the app through a fingerprint sensor. For example, the sensor can be used to change operating settings or go through recent results captured by the camera. The app has three different detail levels that can be activated to provide more or less information about objects.

Google says the goal of the app is to provide more independence to the nearly 253 million people in the world who are blind or have severe vision difficulties.

There are other apps and devices designed to assist these people, too.

Microsoft says the system can provide audio sounds that relate to current light levels around the user. A recently released version also reportedly lets users put their fingers over a photo of something to get a sense of how the object feels. The app produces small vibrations and sounds to help this process. 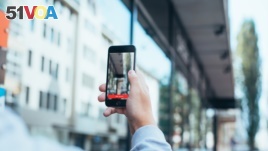 An example of a video call is shown in the Be My Eyes app that connects blind people with sighted volunteers through live calls. (Be My Eyes)

Another free app, called Be My Eyes, connects blind or low-sight individuals with sighted volunteers through live video calls.

vision – n. the ability to see

pocket – n. small bag fixed onto a piece of clothing to hold things

shopping – n. the activity of buying goods in a store

vibration – n. the act of shaking with small, quick movements