Update Required To play the media you will need to either update your browser to a recent version or update your Flash plugin.
By Bryan Lynn
03 July, 2019


A Google-backed project to bring internet connectivity to rural areas around the world is set to launch its first service in Kenya.

The project is led by Loon, which is owned by Google's parent company, Alphabet. Large balloons carry solar-powered equipment high in the sky to send high-speed internet signals to the ground.

Loon officials told the Reuters news service that its balloons are expected to reach Kenya in the coming weeks.

Loon began testing the system in 2011, but this is the company's first market test. 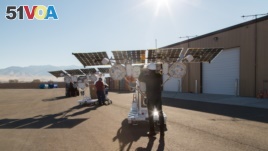 This photo shows Loon team members working on the solar-powered equipment that sends the high-speed internet signal to the ground in areas with no connectivity. (Source: Loon)

The project involves Telkom Kenya, the country's third-largest telecommunications company. The service will sell 4G internet service to people living in a rural, mountainous area. Kenyan transportation officials said they expect to give final approval to the project this month.

Loon aims to bring high-speed internet connectivity to places where populations are "unserved or underserved." The sky-based system can deploy to areas where there are too few people to support the building of signal equipment on the ground.

The balloons that lift the equipment are about 24 meters tall and eight meters wide, Loon says in a description on its website. It is made of a plastic material that is built to last at least 100 days.

The balloons are filled with gas that is lighter than air and rise up to 20 kilometers into the sky – a height twice as high as airplanes fly. This helps the balloons avoid weather problems and wildlife.

Loon balloons move through the skies by wind currents that carry them up and down during the flight path. They are designed to link up with a team of balloons over areas lacking internet connectivity.

Loon says solar collectors power the equipment during the day and charge a battery to run the system at night. When the life of the balloon ends, a parachute self-deploys to guide it back down to the ground.

Loon says its balloons were operational in 48 hours in May after a powerful earthquake struck a rural part of Peru. In the U.S. territory of Puerto Rico, Loon balloons were deployed after Hurricane Maria hit in 2017. In both cases, the equipment was provided for free to make up for internet signals that had been cut.

Alastair Westgarth heads Loon. He says that, in addition to Telkom Kenya, several other telecommunications companies are close to signing deals with the company. He did not provide details.

Officials at several wireless carriers told Reuters they are still exploring the possibilities of working with Loon.

Hervé Suquet is head of technology and information for Orange Middle East and Africa. He said Loon first needs to prove itself in Kenya. "If the results are positive, we would then be potentially interested," he said in a statement.

Kuwait-based carrier Zain Group said it, too, is watching the Kenyan trial closely before making a decision on Loon.

Bryan Lynn wrote this story for VOA Learning English, based on reports from Reuters, Loon and Medium.com. Ashley Thompson was the editor.

battery – n.device that produces and can store electricity

potentially – adv.the possibility of happening in the future