Google's 'Minion' Joke Not So Funny

Update Required To play the media you will need to either update your browser to a recent version or update your Flash plugin.
By VOA
01 April, 2016

This year, however, one trick Google played did not have many people laughing.

The company added a button to its email service, Gmail. The button enabled users to send out a GIF of a minion. Minions first appeared in the 2010 movie "Despicable Me."

The small, yellow creatures starred in their own film last year. 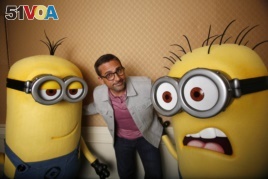 In Google's GIF, a minion dropped a microphone. The GIF was meant to be a humorous, "end of discussion" comeback to long email messages.

The service soon received messages from angry users. Many had accidentally added the minion GIF to important business messages to their employer and co-workers.

Google Inc. apologized and cancelled the minion feature. The company said that because of a technical problem, the GIF "caused more headaches than laughs."

But not all of Google's April Fools' jokes caused anger. Some were more light-hearted.

The video was a play on the company's self-driving cars.

microphone - n. a device into which people speak to record their voices or to make them sound louder

mute - v. to make (something, such as a television) silent