Update Required To play the media you will need to either update your browser to a recent version or update your Flash plugin.
By But Natovenator was
11 December 2022


The expansive dinosaur group that includes big hunters like the T. rex has a strange new member. Its bones were found in Mongolia.

Scientists named the new dinosaur Natovenator polydontus. They say it was about the size and shape of the bird called a goose. It also had a long neck, similar to a goose's.

But, it was not a bird, the scientists say. The research suggests the animal was semi-aquatic, meaning it spent much of its life in water. 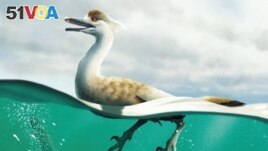 An artist's life reconstruction of the dinosaur Natovenator polydontus, which resembled diving birds and lived about 72 million years ago in what is now the Gobi Desert of Mongolia. (Yusik Choi/Handout via REUTERS)

It lived about 72 million years ago during a period of time called the Cretaceous Period. It was built like a diving bird, with a body meant for quickly swimming in water. Inside its mouth, were about 100 small teeth, the scientists said. And, they said they believe the dinosaur was covered in feathers.

Yuong-Nam Lee of Seoul National University in South Korea is lead writer of the research published in the journal Communications Biology. He said Natovenator has many "peculiar" qualities.

It was the cousin of the speedy little meat-eating dinosaur the Velociraptor. But Natovenator was adapted to a life that involved a freshwater environment. The researchers said the animal may have floated on rivers and lakes, diving to hunt and using its long neck to catch fish and insects.

Natovenator's skeleton is about 70 percent complete. It was unearthed in the Gobi Desert. Many dinosaur skeletons have been found in the desert in recent history.

Natovenator is part of the dinosaur group called theropods. They share some qualities like walking on two feet, or bipedalism. The group is best known for large meat-eaters like Tyrannosaurus. But the group, which includes all birds, had many kinds of dinosaurs.

Philip Currie of University of Alberta helped write the study. He said, "The diversity of theropod dinosaurs by the end of the Cretaceous is totally amazing." He believes there will be more discoveries of peculiar theropods in the future.

Not many of the dinosaurs called "non-avian," or not the birds, are known to have lived a semi-aquatic lifestyle. A close relative of Natovenator named Halszkaraptor, described in 2017, lived a similar lifestyle during roughly the same time in the same area. Both had a very bird-like appearance and were closely related to birds.

Natovenator measured about 45 centimeters long and had a head bone, or skull, about 7 centimeters long. It's front "wings," or limbs, appeared somewhat flattened. They could have been adapted for swimming. The increased ability to swim in water, or streamlining of its body, is shown by ribs that point toward the end of the body, or tail. That placement often appears in diving birds. It permits for better swimming.

There were different diving birds during the Cretaceous, including North America's Hesperornis, which reached about 1.8 meters long. But none are known from the area Natoventor lived.

feathers – n. any one of the light growths that make up the outer covering of the body of a bird

peculiar – adj. not usual or normal

diversity – n. the quality or state of having many different forms, types, or ideas

rib – n. any one of the curved bones of the chest that connect to the spine