Graduates Demand US Colleges Make Up for Past Slavery Ties

Update Required To play the media you will need to either update your browser to a recent version or update your Flash plugin.
By Dan Friedell
29 May 2021


Some young Black people want their universities to fulfill their promises to help the descendants of enslaved people.

They say students and people who live in college communities need to hold the universities responsible. And they say this is the time to do it.

Carroll said, "There's been a shift in America. We're at a different place. Just a few years ago, it was controversial to say ‘Black Lives Matter.'"

Carroll and Thomas say at least their universities recently identified their ties to the slave trade. But they believe there is still more to be done.

Thomas is a member of a group of students who came to Georgetown because of a special program for the descendants of enslaved people. 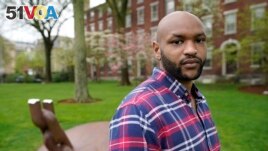 Brown University graduate Jason Carroll, stands for a portrait on the Brown campus in Providence, R.I., on Tuesday, May 4, 2021, near the Slavery Memorial. (AP Photo/Steven Senne)

In the 1800s, Georgetown's leaders helped sell a group of 272 men, women and children who were slaves at large farms in Maryland to other farms in Louisiana. The money from the sale helped the school pay off debt.

About five years ago, Georgetown said it would give students like Thomas special admissions considerations. He is among the first of that group to graduate.

Some of the older universities in the U.S. had ties to slavery or received money from people who sold slaves.

Craig Steven Wilder at the Massachusetts Institute of Technology wrote a book about the connection between higher education and slavery in 2013. Around the time of Georgetown's announcement, he said: "Every college that was established before the American Revolution has direct ties to slavery."

Carroll was a student government leader during his time at Brown. Students there recently voted to ask the university to offer a program similar to the one offered by Georgetown. It would help the descendants of slaves "entangled with and/or afflicted by the university and the Brown family."

The city of Athens is home to the University of Georgia. The city is trying to make up for a 1960s plan that took over the properties of 50 Black families in order to build student housing. Activists and students say both the university and the city need to pay attention to the way the construction hurt families.

Hattie Whitehead Thomas is now 72. She grew up in the Athens neighborhood taken over by the school.

She said the school "needs to do more...and acknowledge what it did." The school has said that the student housing helped Black people because students "from all racial and socioeconomic backgrounds" lived there.

Earlier in 2021, the mayor of Athens signed a resolution that said the city would take steps to make up for the harm caused when the land was taken over.

Efforts to make up for the past

The University of Virginia, or UVA, in the town of Charlottesville, was established by the third American president, Thomas Jefferson. Jefferson was a slave owner.

Lawmakers in Virginia recently approved a program. It requires the state's five public colleges, including UVA, to identify the descendants of enslaved people who worked on the land that the schools now occupy, and offer them benefits. One of the benefits might be free college.

Cauline Yates says she is a descendant of one of Jefferson's slaves. She said the university needs to "stand up and honor our ancestors."

Brian Coy is a UVA spokesperson. He said the school is not yet sure what kind of offer it will make to the descendants of slaves. But he said UVA created a memorial that recognizes the work enslaved people did for the school.

Caine Jordan is a graduate student at the University of Chicago. He said students there are upset that the university does not seem to be willing to take full responsibility for how it dealt with Black people in the past.

The school removed markers honoring Stephen Douglas, a U.S. senator from the 1800s who profited from slave labor. But the school said Douglas has no connection with the university, which was founded after the senator's death. The University of Chicago president is expected to make a statement noting the school's commitment to racial fairness.

"All of it rings hollow if you're founded on Black pain, and you're not willing to acknowledge that," Jordan said.

Thomas and Carroll want people to continue to follow the stories at Georgetown and Brown universities. Both schools say they will look for ways to spend money on community projects that would help slave descendants.

Thomas said observers need to pay attention to how the money is spent. "The fear is that the university will use these funds for their own purposes."

In Rhode Island, one part of the Brown University plan is to spend money to help local schools in Providence. However, Carroll notes that most local students are not Black. "That's not really a solution," he said. "In a way, it's even more insulting."

Davarian Baldwin is an American studies professor at Trinity College in Hartford, Connecticut. He said the students and community members should keep the pressure on the universities.

"(They) will do as little as they can get away with," he said.

Philip Marcelo wrote this story for the Associated Press. Dan Friedell adapted it for Learning English. Mario Ritter, Jr. was the editor.

Do you think American colleges and universities are doing enough for the descendants of enslaved people? Tell us in the Comments Section and visit 51VOA.COM.

descendant –n. someone who is related to a person or group of people who lived in the past

graduate –v. to earn a degree showing official completion of studies at a college or university

benefits –n. (pl.) money or something extra that is provided by an employer or government to a worker or citizen

acknowledge –v. to accept or not deny the truth of some statement or position

shift –n. a change in position or way of thinking

controversial - adj. relating to or causing much discussion, disagreement, or argument : likely to produce controversy

entangle –v. to get (someone) involved in a confusing or difficult situation — usually used as (be/get) entangled

afflict –v. to cause pain or suffering to (someone or something)

get away with –v. to do something without being held responsible