Update Required To play the media you will need to either update your browser to a recent version or update your Flash plugin.
By John Russell
08 September 2022


News reports and everyday discussions increasingly involve the term "attention," as in the "attention economy" - the idea that human attention is a limited resource.

If you wanted to talk about "attention," how would you do so? What terms and structures would you use?

In today's report, we will explore the noun, attention, and some terms that connect to it. You will learn about the most common ways Americans talk about "attention." 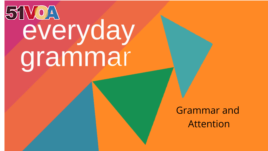 The Online Etymology Dictionary describes the history and meaning of many words.

It suggests that the noun "attention" dates to the late 1300s, with the meaning of "active direction of the mind upon some object or topic."

The Online Etymology Dictionary also suggests that the term "is used with a remarkable diversity of verbs."

One of the most commonly used verbs with the noun "attention" is "pay."

You might link the verb "pay" with money. You "pay money" for something. For example, you could say "I paid $100 for this phone."

But in modern times, the most common kind of "paying," Google's Ngram suggests, is with attention.

The most common way this structure appears is as this: pay attention to.

Google's Ngram shows "pay attention to" becoming more common during the 1980s. That growth has continued up to the present (or at least up to 2019, the latest year included in the data).

This change suggests an increasing concern about attention.

Here are a few ways you might hear Americans use "pay attention to..."

A daily reader of news or social media might say:

I pay attention to the news.

I pay attention to trends on social media.

In the negative form, a person might use the auxiliary verb "do," as in:

In the case of regret, a person might use the modal "should," as in:

I should have paid attention to my parents.

But we do not only "pay attention." We can also "draw attention," meaning to cause attention to be given to someone or something.

For example, a teacher might say "I would like to draw your attention to the image on page 37."

Sometimes Americans use modifiers before the noun "attention." For example, a person might say,

That social media post drew a lot of attention.

In this case, "a lot of" appears in between the main verb, draw, and the noun, attention.

Other structures make a claim about value. The structure "deserves attention," for example, could suggest that something has not been the subject of attention - but it should be.

An important idea related to "attention" is the verb (and noun) "focus."

The verb form of "focus" means to direct your attention or effort at something.

As with other structures that use the noun "attention," "focus" has become more common over the past thirty years, Google's Ngram suggests.

"Pay attention to" and "focus" have very similar meanings. But in everyday situations, we sometimes use them in slightly different ways.

Still, if you use one in place of the other, your meaning will probably be understood.

Putting it all together

The idea of this report was to draw your attention to the term "attention" - and some related ideas, such as "focus."

In the future, consider how debates about "attention" play out in the news or everyday discussions.

For example, you might read a news story about companies trying to "attract attention to" their social media services by using advertising. You might hear a person suggest that too many people are "paying too much attention to" social media.

Or, critics of the "attention economy" might "draw attention to" problems that it creates. They might say "people cannot focus on what matters," for example.

Let's end this report with a chance to use the ideas described today. Write a short response to one of the following questions:

Write us in the comments section of our website, www.51voa.com, or write us an email at learningenglish@voanews.com.

modifier – n. a word (such as an adjective or adverb) or phrase that describes another word or group of words