Update Required To play the media you will need to either update your browser to a recent version or update your Flash plugin.
By Alice Bryant
02 January 2020


The New Year can come on different dates for different cultures. Most of the Western world, for example, celebrates it on January 1. This year, the Lunar New Year takes place on January 25. The Persian New Year, Nowruz, falls on March 20. And the Islamic New Year is August 19.

Popular New Year's resolutions in the United States, for example, include losing weight, improving your finances, volunteering for a charity and spending less time on social media.

On today's Everyday Grammar, we will show you how to talk about resolutions in English. 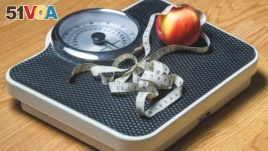 First, let's learn how to ask people about their resolutions.

Listen to a short conversation:

Hey there, Jill. Happy New Year! Great to see you.

Hi, Jonathan. Happy New Year to you too! How was yours?

It was crazy! We went to New York and watched the ball drop in Times Square. Really crowded and loud – but still really fun.

Sweet! Do you have any New Year's resolutions?

Jill asked Jonathan about resolutions simply by saying, "Do you have any New Year's resolutions?"

Now, let's find out how to answer the question.

When we make statements about our resolutions, we often use phrasal verbs.

We can use the phrasal verb "take up" to say that we will start a new activity as a hobby.

Listen to Jill and Jonathan continue their conversation:

Sweet! Do you have any New Year's resolutions?

Yes, I do. I plan to take up kickboxing starting next week. I'm excited to finally do it rather than just talk about it! How about you?

Another phrasal verb for resolutions is "give up," which is to stop doing or using something. We can use this verb to talk about ending bad habits or changing a behavior for a time.

Let's hear Jill respond using the verb "give up":

I am giving up sugar for the month of January. Then, for the rest of the year, I'm avoiding soft drinks.

Impressive! I wish I could join you but kickboxing class starts soon. I'll probably want a sweet snack after class!

Another phrasal verb, "cut out," has the same basic meaning as "give up." For example, Jill could say, "I am cutting out sugar for the month of January."

But in many situations, we do not need phrasal verbs to talk about resolutions, as you will soon see.

Next, let's talk about verb tenses and forms. Jonathan talked about his new kickboxing hobby using the verb "plan" followed by the infinitive verb form and Jill talked about giving up sugar using the present continuous verb tense, also called "BE + ing."

We can also use the simple future tenses: one with "will" and the other with "going to." These tenses are especially useful when the New Year has not come yet.

Imagine it's the last week of the year and a few people are talking to each other about resolutions: Here are some things you might hear:

By January 1, I will end a few unhealthy friendships.

When we use simple future tenses to talk about resolutions, we're expressing that we are making a promise to or plan for ourselves. The noun "resolution" comes from the verb "resolve," which means to make a serious decision to do something.

My New Year's resolution is to call my sister on video chat every week.

The infinitive verb here is "to call."

My New Year's resolution is calling my sister on video chat every week.

Well, that's all for today's program. Tell us about your New Year's resolutions in the comments below.

charity – n. an organization that helps people who are poor, sick, or otherwise in need

phrasal verb – n. a group of words that functions as a verb and is made up of a verb and a preposition or an adverb, or both

tense – n. a form of a verb that is used to show when an action happened

chat – n. a talk held over the internet by people using a computer or phone