Update Required To play the media you will need to either update your browser to a recent version or update your Flash plugin.
By

In celebration of the event, we will explore a couple areas of connection between the Olympic games and grammar.

You will learn how subjects such as ordinal numbers and sentence fragments help describe the events and results of the competitions. 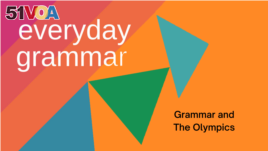 When you first learn numbers in English, you generally start with numbers such as one, two, three. These are known as cardinal numbers.

The three most important ordinal numbers in the Olympics are first, second, and third. In other words, gold, silver, and bronze.

Ordinal numbers can act as nouns, adjectives, or adverbs. And when we talk about the Olympics, we use ordinal numbers for all of these purposes.

"When do the Olympics start?"

"They start on the third."

"They start on the second."

In both cases, the ordinal number is acting like a noun. It means the order of the day in the month.

You can tell the number is acting like a noun because of the word "the" in front of it. In English, words such as "the" are markers of nouns.

Ordinal numbers also can act as adverbs. In discussions before, during, and after the Olympics, you might hear a person say, "That team ranked third in the world last year." In this case, the word "third" gives more information about the past tense verb, ranked.

You might also hear ordinal numbers used to modify adjectives, as in "second largest team..." or "third winningest team...."

Here is an example of this idea during the opening ceremony. The broadcaster describes the "second-largest" delegation.

Finally, you might also hear ordinal numbers used as an adjective.

Ordinal numbers are one important area of grammar that connects with the Olympics. But another area of connection is expressions of surprise with "What..."

In many cases, these expressions take the form of a sentence fragment.

A fragment is a kind of sentence that is not complete. A complete sentence has a subject and predicate that consists of a verb, objects, and so on.

An example of a complete sentence is this:

I love the Olympic games.

The subject is "I;" the predicate is "love the Olympic games."

Sentence fragments leave out one of these parts – either the subject or the predicate. Fragments are common in everyday speaking, speeches, and news broadcasts about sports, among other situations.

In the Olympics, these fragments often take the form of expressions of surprise during and after events.

In the following video, the broadcaster says "What a hectic and unexpected result!"

"Wow, what a hectic and unexpected result!"

In this case, the statement does not have a verb. It begins with "what..." and continues with a noun phrase – "a hectic and unexpected result."

You will hear all kinds of these statements during broadcasts of the Olympic games. For example, you might hear a person say "What a race!" or "What a beautiful finish!" or "What a finish!"

The central idea in today's report was to explore an area of connection between an event -- the Olympics -- and an area of grammar.

When you watch the Olympics – whether on live television or online – pay careful attention to how speakers use ordinal numbers and expressions of surprise. Make careful note of what you hear. Then, practice using the structures.

You can also take any other event, celebration, or activity, and think of the areas of grammar that connect to it. Doing so will not only help your understanding of grammar, but also make your studies more enjoyable.

ordinal number – n. a number (such as first, fifth, or 22nd) that is used to show the position of someone or something in a series

sentence fragment – n. grammar: a group of words that is written out as a sentence but that lacks a subject or verb

delegation – n. : a group of people who are chosen to vote or act for someone else