Update Required To play the media you will need to either update your browser to a recent version or update your Flash plugin.
By VOA
01 October, 2015

The report assessed the condition of the reef between 2009 and 2014. It showed that pesticide and pollution have decreased, but not enough to reach environmental targets.

Sediment and chemicals can weaken coral, hurting its ability to feed and grow. Coral are live animals that take root in the ocean floor, but they are not plants. Reefs are the hard skeletons left at the bottom of the sea by small marine creatures called polyps. The polyps then form the larger structure of a reef. 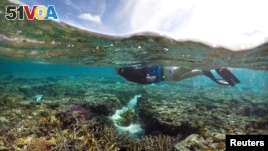 The coral reefs in the Great Barrier Reef in Australia are dying from pollution. Coastal sugar plantations allow fertilizer to run into the ocean water.

Corals also are some of the most diverse ecosystems on the entire planet. They can make a home for invertebrates, crustaceans, fish, and sea snakes to name a few.

"Over that five-year period, we did see some progress towards our targets. Sediment is down 12 percent and pesticides loads are down 30 percent. But what is most disturbing is these results are far from our targets. Progress towards these targets flat-lined in the period 2013-2014. If one of my kids came home with a report card like this, I would be a bit disappointed. There is more bad news here than good news."

The report also found that fewer than one-third of Queensland's sugar plantations used techniques to reduce the use of pesticides.

Only 28 percent of land managers -- known as graziers -- managed their land properly. They had reduced harmful water runoff to safeguard the health of the reef. The official target is a 90 percent reduction in pesticide use within three years.

Farmers' say they are going to use more sustainable practices as soon as possible.

What do you think can be done to help protect the Great Barrier Reef? We want to hear from you. Write your thoughts in the comments section.

assess– v. to make judgment of something

pollution – n. substances that make land, water, air, etc., dirty and not safe or suitable to use

environmental - n. the conditions and influences that affect the growth, health, progress of someone or something

sediment – n. material (such as stones and sand) that is carried into water by water, wind, etc.

chemical –n. a substance (such as an element or compound) that is made by a chemical process

invertebrates – n. a type of animal that does not have a backbone

crustacean – n. a type of animal (such as a crab or lobster) that has several pairs of legs and a body made up of sections that are covered in a hard outer shell

graziers– n. a person who manages land or cattle

runoff –n. water that flows over the surface of the ground into streams

safeguard –v. to protect someone or something