Update Required To play the media you will need to either update your browser to a recent version or update your Flash plugin.
By VOA
06 July, 2015

Greek Finance Minister Yanis Varoufakis resigned Monday. His resignation came a day after Greek voters rejected a demand by international lenders for new financial reforms in the country. The lenders promised economic aid to Greece if the voters approved, and the government carried out, the reforms.

The finance minister's decision was a surprise, because he had said earlier that he would resign only if the Greek people voted to accept the lenders' demands. Mr. Varoufakis has often clashed with foreign creditors over the past few months. A few days ago, he accused the European Union of "terrorism" because he believed it was trying to frighten Greek voters into accepting the EU's terms. On Monday he said he believed his resignation could help reach an agreement with the country's lenders.

On Sunday, 61 percent of voters rejected warnings from leaders that ignoring the terms could force the country from the 19-nation union that uses the euro. Nearly 10 million people were registered to vote in the special election. Officials say more than 62 percent actually voted. 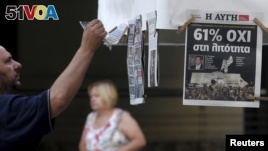 A man looks at newspapers showing the results of yesterday's referendum in central Athens, Greece, July 6, 2015. Greeks overwhelmingly rejected conditions of a rescue package from creditors on Sunday, throwing the future of the country's euro zone members. (REUTERS/Christian Hartmann)

Prime Minister Alexis Tsipras says the government is ready to return to negotiations with Greece's creditors. He says the election results will give him the ability to negotiate a better deal for his country.

However, officials in Germany, Europe's largest economy, are not pleased with the election results. A spokesman for Prime Minister Angela Merkel said that because of the results of the vote on Sunday "by Greek citizens, there is no basis to enter into negotiations on a new aid program." A German Finance Ministry spokesman said "I can see no reason to enter into discussions."

Across Europe, stock prices fell when financial markets opened Monday, but quickly recovered. Observers blamed the drop on the vote in Greece.

Officials in Nigeria say two bomb attacks have killed more than 40 people. More than 45 others were reported injured.

The bombs exploded late Sunday at an Islamic religious center and a restaurant.

The bombings continue a deadly series of attacks that left more than 200 people dead in the past week.

Nigerian officials are blaming the terrorist group Boko Haram for the violence.

Pope Francis has flown to South America for an eight-day visit to Ecuador, Bolivia and Paraguay. The 78-year-old leader of the Roman Catholic Church landed Sunday in Ecuador's capital, Quito. He met there with Ecuador's president and church officials. Huge crowds gathered along the roads from the airport to the place where Pope Francis will be staying.

More than a million people were expected to attend a religious ceremony led by the pope -- the first South American head of the church -- on Monday in the city of Guayaquil. He was expected to talk in eight languages during the Mass. He will also lead a Mass in Quito on Tuesday.

Later in the trip, the pope will visit a prison in Bolivia, meet with Bolivian trash collectors and stop in a Paraguayan neighborhood where people live in poorly-built shelters.

This is the pope's ninth foreign trip in two years.

No team had ever scored more than two goals in a Women's World Cup final. But American captain Carli Lloyd had three goals all by herself within just 16 minutes.

The seven combined goals in the match are the most ever in a Women's World Cup final.

This newscast was based on stories from VOA's News Division. George Grow adapted it for Learning English. Christopher Jones-Cruise was the editor.

lender(s) – n. creditor; someone or something that makes a loan

euro – n. the name of the money used in 19 European countries

trash – n. waste products; things that are no longer useful or wanted