Cold War Waste Could Reappear Due to Global Warming

Update Required To play the media you will need to either update your browser to a recent version or update your Flash plugin.
By Jim Dresbach
09 August, 2016

Camp Century was built in 1959. The base was to study the possibility of deploying nuclear weapons from the Arctic during the Cold War. The Cold War was a period of tension between the former Soviet Union and the U.S. which lasted from the end of World War II to 1991.

The base was closed in 1967. Scientists thought that any hazardous material left at the base would be covered with ice forever. Now, new research suggests the base could be exposed to the environment by 2090.

The base is believed to contain biological, chemical and radioactive waste. The study warns that exposed waste could disrupt Greenland's environment. 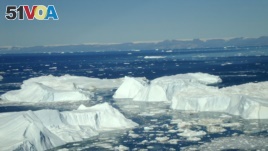 Icebergs at Jakobshavn, one of four glaciers that scientists typically use to model the activity of all Greenland glaciers. The new study finds that this method of modeling is too simplistic to accurately capture how Greenland's ice is truly changing.

William Colgan is a climate and glacier scientist at York University in Canada. He is the lead author of the study. He said people dealt with waste differently 60 years ago. Now, there are new problems related to the climate that people must think about, he said.

Researchers have now listed the waste at the base. The hazardous substances include 200,000 liters of diesel fuel, and 240,000 liters of wastewater. There are also polychlorinated biphenyls, or PCBs, at the site. Those chemicals are considered bad for the environment.

In addition, there is also an "unknown volume of low-level radioactive coolant from the nuclear generator."

Researchers studied old engineering records to find out how deeply the waste is buried and how much the ice has moved since the 1960s.

All the waste could enter the environment as the climate warms and the ice sheet melts, researchers said.

Camp Century covers an area about the size of 100 soccer fields. It is about 200 kilometers from Greenland's coast. Nearly 200 soldiers lived there when it was an operating U.S. base.

The camp was sometimes called "the city under the ice."

Any possible cleanup of the site could be tricky. The base belonged to the U.S. However, Greenland belongs to Denmark.

International law has clear rules about dealing with hazardous waste. But, it is not clear on who is responsible for cleaning up the waste from a long time ago.

The study was published this week in Geophysical Research Letters, a journal of the American Geophysical Union.

disrupt – v. to interrupt the normal progress or activity

radioactive – adj. having or producing a powerful and dangerous form of energy

coolant – n. a liquid that is used to cool an engine or machine

generator– n. something that produces something

ice sheet– n. a very large and thick area of ice that covers a region