Update Required To play the media you will need to either update your browser to a recent version or update your Flash plugin.
By Dan Friedell and Anna Mateo
28 October 2021


The mineral-rich island of Greenland, a semi-autonomous territory of Denmark, has a large amount of an ancient rock known as anorthosite. Anorthosite is similar to the rock that astronauts collected from the moon in the early years of American space exploration. Scientists believe anorthosite is nearly as old as Earth itself.

Anorthocite is found in southwestern Greenland. And it has mining companies excited about making money. The rock contains compounds that can be used to make fiberglass and aluminum.

People who support taking the minerals out of the ground note that the money earned may help Greenland reach its long-term goal of independence from Denmark.

Naaja Nathanielsen is Greenland's mineral resources minister. She said, "Not all money is worth earning." She added that Greenland is willing to make fast decisions when it comes to protecting the environment.

The island's new government campaigned on a platform of environmental responsibility. It recently banned future oil and gas drilling. The government may begin a new ban on mining for uranium. A ban on uranium mining in Greenland was lifted eight years ago.

Effect of a ban

A new ban would halt development of one of the world's largest rare-earth deposits. The metal deposit area is called Kuannersuit in Greenlandic and Kvanefjeld in Danish. Its operator was in the process of securing a permit to mine there.

The metal deposit was an important issue in the elections held earlier this year. Greenlanders worry that uranium mining could cause environmental problems.

The head of the company that holds the mining rights in the area called the concerns "exaggerated," or greater than they need to be. John Mair of Greenland Minerals told the Reuters news agency that uranium "is a political issue which is being driven by exaggerated and misleading claims."

If the mine remains operational, the government estimates it could bring in $233 million each year for Greenland.

Currently, the island's 57,000 people mostly depend on money from fishing and the financial support it gets from Denmark. But Denmark would reduce the amount of money it sends to Greenland based on future earnings from mining.

Some Greenlanders believe the mining should stop until the island is independent from Denmark.

Pele Broberg is Greenland's minister for business and trade. He told Reuters, "Under the current agreement, large-scale mineral extraction makes no sense." He added, "Why would we do that while we're subject to another country?"

But some people in Greenland support mining.

"We have to find other ways to make money. We can't just live off fishing," said Johannes Hansen. He is a local firefighter and carpenter. His town of nearly 160 people is about 50 minutes by boat from a planned anorthosite mine.

Greenland Anorthosite Mining is a company developing the mine. It has a plan to process 120 metric tons of anorthosite for possible buyers in the fiberglass industry. 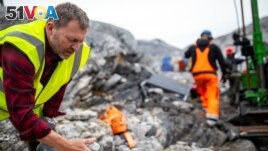 Anorthosite is a more environmentally friendly choice than some other materials, including kaolin. A spokesperson for Greenland Anorthosite Mining said anorthosite melts at a lower temperature than kaolin. And it produces less waste and greenhouse gases. The company says it hopes to have an exploration permit by the end of 2022.

The bigger aim is for anorthosite to be used instead of bauxite to produce aluminum. Aluminum is one of the minerals important to reducing greenhouse gases. It can make vehicles lighter and is fully recyclable.

Anorthosite also fits in with European Union plans to use different mineral sources. Asuncion Aranda leads an EU-funded research project into anorthosite. She said more research is needed to cut costs and reduce harmful effects to the environment.

"We don't know yet if our process will be competitive from the start compared with the established production method," she said. Aranda added that "...if all goes well ..." we could see the first marketable production in eight to 10 years.

While the EU is looking at uses for anorthosite here on Earth, the American space agency NASA has other ideas.

NASA has been using anorthosite from a smaller Greenland mine already in production. That mine is operated by a Canadian-based company called Hudson Resources. The company is testing equipment that could be used for mining on the moon and even establishing communities there.

A scientist at NASA's Johnson Space Center is John Gruener. He said the anorthosite deposits found in Greenland and other places on Earth are not exactly like what is found on the moon. But they are close.

Greuner said, "If we are really going to live off the land at the south pole of the moon...we will have to learn how to deal with anorthosite."

Dan Friedell and Anna Mateo adapted this story for Learning English based on a report by Reuters. Ashley Thompson was the editor.

What do you think about the mining question in Greenland? Tell us in the Comments Section and visit 51VOA.COM.

semi-autonomous – adj. partly having the right to govern itself

fiberglass – n. a light and strong material that is made from thin threads of glass and that is used in making various products

platform – n. the official beliefs and goals of a political party or candidate

drill – v. to make a hole in something with a large tool, often used to describe the search for oil or gas

recycle – v. to make something new from (something that has been used before)