Update Required To play the media you will need to either update your browser to a recent version or update your Flash plugin.
By Dan Friedell
31 July, 2017

As of July 31, Grizzly bears in Yellowstone National Park are no longer considered "threatened."

Grizzlies are large, brown bears that live in North America. Male grizzlies weigh over 200 kilograms, while the females weigh less than 200 kilograms. They are about two meters long.

Grizzlies once lived across much of North America. There were tens of thousands of them.

They can be found in Alaska, Canada and across the northwestern United States, including in Yellowstone. The park is made up of more than 8,900 square kilometers of land in Wyoming, Montana and Idaho. 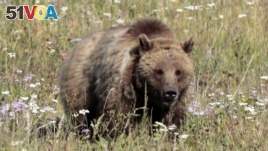 A grizzly bear walks in a meadow in Yellowstone National Park, Wyoming, August 12, 2011.

About 40 years ago, scientists estimated that fewer than 150 bears remained in Yellowstone National Park. After that estimate, Yellowstone grizzlies were added to the "threatened" list under the Endangered Species Act.

The Interagency Grizzly Bear Study team recently determined there are now about 700 bears in the park. The team is made up of scientists from the U.S. Geological Survey, National Park Service, Fish and Wildlife Service and other government agencies.

The study team says that population increase means the bears do not need to be protected by the government. They are no longer considered "threatened."

State wildlife agencies in Wyoming, Montana and Idaho will now be in charge of managing the bears' population. Officials from the three states told the Bozeman, Montana, newspaper that the decision will make their jobs easier.

Brian Nesvik is the chief game warden for Wyoming Game and Fish. He told the Bozeman Daily Chronicle the change will permit each state to respond more quickly if there are problems with the bears.

Sometimes bears that are involved in incidents with humans or farm animals must be put in another part of Yellowstone or even killed. In the past, Nesvik said, the state would propose a plan to the federal government, and the two organizations would not always agree on a solution.

The grizzly bear population is strong, but some people remain concerned about their safety.

In an opinion article in the New York Times last month, writer Thomas McNamee said the bears' food supply is declining. That includes the seeds of pine trees, fish that swim in local rivers and the moths that live high in the mountains.

Hunting is another concern. The state of Montana is considering making it legal to hunt the bears. About three percent of Yellowstone land sits within Montana.

However, a spokeswoman for Montana Fish, Wildlife and Parks, told the Bozeman newspaper that "we will not be talking about a hunting season anytime soon."

Many organizations are protesting the change in the bears' protection status. The groups have to wait 60 days from the date of the change before they can announce a lawsuit against the government.

Many scientists, however, say the bears should be able to continue to thrive, even with reduced protection from the government.

Dan Friedell wrote this story for VOA Learning English based on reports by the Associated Press, New York Times and Bozeman Daily Chronicle. Ashley Thompson was the editor.

Do you think the bears will be safe? We want to know. Write to us in the Comments Section or on 51VOA.COM.

threatened – adj. in danger of something bad happening

declining– v. to become lower in amount or worse in condition

status– n. the official position of a person or thing according to the law

thrive– v. to grow or develop successfully : to flourish or succeed

warden– n. a person who is in charge of or takes care of something