Update Required To play the media you will need to either update your browser to a recent version or update your Flash plugin.
By Phil Dierking
02 February, 2017

This event is part of an American tradition called "Groundhog Day." It takes place every February 2 in the small Pennsylvanian town of Punxsutawney.

Since 1886, thousands of people have come together on this day on a hill called "Gobbler's Knob." They watch as a groundhog named Phil predicts the length of the winter season. Today was the 131st official Groundhog Day.

A groundhog is a large rodent, and part of a family known as marmots.

On Groundhog Day, Phil the groundhog comes out of a hole in the earth just after sunrise. As the tradition goes, Phil will then look for his shadow on the ground. If he sees his shadow, there will be six more weeks of cold weather during winter. If Phil does not see his shadow, warmer weather will arrive soon.

From Europe to America

The story of Groundhog Day comes from an early Christian European tradition, says John Griffiths. He helps take care of Phil the groundhog.

"It stems from the tradition of ‘Candlemass.' February 2 actually is the halfway point of winter. In Europe, they would melt their candles down and make new candles ... and it was basically a day for communities and folks to get together."

Griffiths said that when European settlers came to Pennsylvania from Germany, they held on to that tradition. They decided that the groundhog was the best animal to continue the tradition.

The town of Punxsutawney held its first Groundhog Day in 1886, but the first official Groundhog Day at Gobbler's Knob happened the next year, in 1887.

The legend of Phil

Phil is taken care of by a local group known as Phil's "Inner Circle." Griffiths is a member of the Inner Circle. He says the group helps pull Phil out of the hole on Groundhog Day. The members also take care of the day-to-day activities of the Groundhog Club. The Groundhog Club organizes the annual celebration. 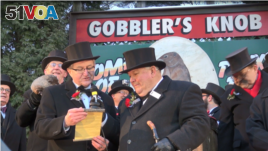 Phil has become very important for the town of Punxsutawney. This year, between 15,000 to 20,000 people came to town for the celebration. The event helps support the local economy.

Many people say that Punxsutawney Phil is always correct with his weather predictions. Elaine Owen traveled to Punxsutawney from Greenwich, Pennsylvania. It was her first time coming to the event.

"It's just been a tradition that everybody says that the groundhog is very accurate. And whatever he predicts is what happens."

As the story goes, the groundhog that appeared in this year's event is the same groundhog that saw its shadow in 1886. Phil is able to live so long because he drinks "groundhog punch," made from a secret recipe. One sip is given to Phil every summer. It is enough to give him many more years of life.

More than just the weather

The Stormfax website looked back at Punxsutawney Phil's predictions over the years. It found Phil has been correct 39 percent of the time. He usually predicts six more weeks of winter weather.

"It's not religious, it's not political, it's all about having fun. It's a time of the year... it gives everybody a chance to get out and for one day, cast all their cares off and have a good time." 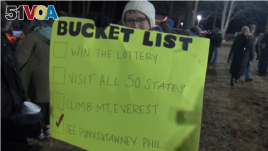 Visitor to Punxsutawney, Pennsylvania on February 2, 2017

Visitors agree. One visitor who went by the nickname of "Winter" says the event helps bring the community together.

"I think it brings a community together, and people get really excited... generally speaking Groundhog Day is something that, for a very long time, has brought communities together."

Whether it is for the community, the weather prediction, or just the tradition itself, Groundhog Day is one of America's most unusual celebrations.

Do you think an animal can predict the weather? We want to hear from you. Write to us in the Comments Section or on 51VOA.COM.

accurate - adj. able to produce results that are correct

candle - n. wax that has been formed into a stick or another shape and has a string in the middle that can be burned

cast - v. to throw or move (something) in a forceful way

celebration - n. a party or other special event that you have for an important occasion or holiday

groundhog - n. a small, furry North American animal that lives in the ground

marmot - n. a small animal of America and Europe that has short legs and that lives in holes that it digs in the ground

rodent - n. a small animal (such as a mouse, rat, squirrel, or beaver) that has sharp front teeth