Update Required To play the media you will need to either update your browser to a recent version or update your Flash plugin.
By VOA
20 September, 2015


Recently, hackers have attacked computer systems and then released information that many people thought was secure. This happened to the top leadership in the U.S. Defense Department. Hackers gained entry to the email system of the Joint Chiefs of Staff's office. Hackers also attacked a dating website and released the names of people seeking relations outside their marriage. This shocked the site's users, who thought the website was secure.

General Philip Breedlove is the top commander of the U.S. European Command. He said the Cyber Defense Center is working to keep computer technology safer for all of the North Atlantic Treaty Organization. The center provides cyber security defense and policy advice to interested NATO members. 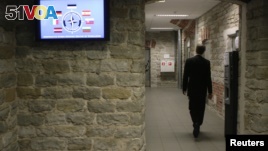 A staffer of the NATO Cooperative Cyber Defense Center of Excellence walks in the center in Tallinn, Estonia.

"When it comes to the NATO networks and how we fight together as NATO, there are 28 doors to this alliance. If one of those doors is wide open, the alliance is wide open."

The center also provides assistance to other partner countries, universities and even private businesses.

The general spoke last weekend at a NATO meeting in Turkey.

Financing for the center comes not from NATO, but from volunteer nations. Officials say the center's work has played an important part in improving the alliance's cyber-defense capabilities.

Each year, the alliance carries out a war game in which NATO forces try to protect a make-believe country from cyber attack. The center provides the fake country's computer network. Participating nations must repair and strengthen that network.

Lauri Aasmann is the chief of the center's Law and Policy Branch. Mr. Aasmann says technology experts from different NATO countries are critical to defense building.

"We strongly believe that in order to build or have a good defense, you should understand how the attack works, how the offense works."

The center works out of an old building in the small country of Estonia. It may seem like an unusual choice for such an exercise. However, Estonia is among the best places in the world for Internet access. Wireless connections are available almost everywhere, even in unexpected places, like inside buses and or on a public beach.

A recent report by the non-profit group Freedom House rates Estonia second worldwide for Internet freedom. In comparison, the United States was fifth on that list.

In Estonia, banking is done mostly online. Estonians say they rarely carry money. Most government business is done electronically. But Estonians know from experience that a cyberattack on their Internet could cause huge problems.

A massive cyber attack in 2007 knocked out Internet access to banks, ministries, parliament and other organizations for days. The attack took place during Estonia's dispute with Russia about the relocation of a marker called the Bronze Soldier of Tallinn. Many blamed the attack on Russia, which is Estonia's eastern neighbor.

Since then, Estonian officials have remained on guard to prevent and defeat cyber attacks against the country and its allies.

capabilities – n. the ability to do something; abilities

fictitious – adj. not true; not real