Group in Kenya Aims to Get More Women on Motorbikes

Update Required To play the media you will need to either update your browser to a recent version or update your Flash plugin.
By Ibrahim Onafeko
03 October, 2019


A new organization in Kenya wants more women to ride motorcycles on the streets of the capital, Nairobi.

The club is called Piki Dada, which means "motorbike sisters" in Swahili. The group started in June and now has 40 members. 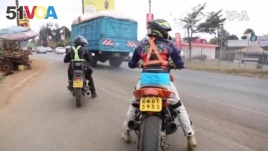 Patience Mehta is a farmer and administrator in Nairobi. She started the club to give women a way to share their experiences on motorbikes.

Interest in motorbikes is increasing in Kenya. The desire for a more efficient means of transportation has pushed that growth.

The growing interest in bikes among women has led to changes in the marketplace, too.

Bike dealers have begun selling riding gear especially made for women, Mehta said. They have also begun importing motorbikes that are sized for women.

Mehta wants to change the way people think in the East African nation.

"People (are) thinking it's just a man's sport," Mehta said of motorbiking.

Dmenaris Mainis is an internet technology security analyst. She has ridden motorbikes for three years and has learned defensive skills to try to avoid accidents.

She said, "We find that in some areas where bikes are not very common, they're not very cautious about us...You find someone who's just coming into your lane."

Piki Dada is not the only women's motorbike group. Throttle Queens, the Inked Sisterhood and Heels of Steel support female motorbikers through talks and training. Club members work to educate the public and mentor girls and women. They also go into schools to offer social support and plan weekend rides outside of the city.

Some of the club members see riding a motorbike as a get-away.

"It's a way to set yourself free," Mainis said. "Every time I ride, I feel like I am able to put everything aside and just concentrate on the road and to have a good time. It's just very special to me."

Piki Dada is open to all women. They must have a registered bike, Mehta said. She added that enthusiasm also is required.

"If you don't have that energy, then you will not be able to keep up," she added.

mentor –v. to teach and give advice to a less experienced and often younger person

concentrate –v. to give your full attention to something

adrenaline –n. a substance, released by the body, which causes the heart to beat faster and provides a burst of energy