Update Required To play the media you will need to either update your browser to a recent version or update your Flash plugin.
By Dan Friedell
10 June 2022


The panel of lawmakers looking into the attack on the U.S. Capitol on January 6, 2021, said former President Donald Trump is to blame for, what they called, an "attempted coup."

The panel is made up of mostly Democratic lawmakers from the House of Representatives along with two Republicans.

The lawmakers said that Trump supporters were following the president's suggestion to take over the U.S. Capitol. At the time, Congress was meeting to confirm President Joe Biden's victory in the November 2020 presidential election. 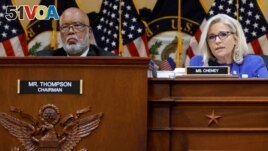 The committee held a special hearing on Thursday night. The goal was to show Americans new video of extremist groups leading the attack, hitting police officers with bats and poles. The video also showed Trump's close advisers saying they did not believe the election was stolen.

The hearing was shown by most American television news networks.

Caroline Edwards is a Capitol police officer who was there trying to stop the attackers on January 6. She said she saw her coworkers hit in the face and covered in blood. She said the floors were slippery from blood and compared it to a war movie.

"It was carnage. It was chaos," she said.

Over 100 police officers were hurt. One person, a woman, was shot and killed by police. In all, four people who were in the crowd at the Capitol that day died. At least five law enforcement officers later died, most reportedly by suicide.

Representative Bennie Thompson is a Democrat from Mississippi and leader of the panel.

He said: "Democracy remains in danger," and said Trump and some U.S. lawmakers are choosing to remember the attack, as "patriotism." He compared this to justifying slavery and other violence against Black Americans.

Other supporters of Trump, including his daughter Ivanka Trump, her husband Jared Kushner, and former top government lawyer Bill Barr were shown in videos. They said that the idea of a stolen election was false.

Kushner called it "whining," Barr denied it and Ivanka Trump said she accepted Barr's opinion about the election.

Another part of the video showed leaders of extremist groups called the Oath Keepers and Proud Boys saying they attacked the Capitol because Trump asked them to.

Liz Cheney is the daughter of former U.S. Vice President Dick Cheney and a Republican representative from Wyoming. She is one of the panel's leaders.

"President Trump summoned a violent mob," she said, adding that Trump did not work to "preserve our union—or worse, cause(d) a constitutional crisis..."

Trump is still considering running for President in 2024. He recently said the actions of his supporters on January 6 "represented the greatest movement in the history of our country."

Other Republican lawmakers used Twitter to say: "All. Old. News."

The Republican Party leader in the House of Representatives is Kevin McCarthy of California. He refused to give a statement to the panel. He has called the group "a scam."

In coming weeks, the panel is expected to show more about Trump's false campaign to "Stop the Steal," the term he used to say the election results were untrue. The members aim to show the work Trump and his lawyers did to push the U.S. Department of Justice to dispute the election.

The Justice Department so far has arrested and charged more than 800 people for attacking the U.S. Capitol on January 6.

Many lawmakers who were there that day were also in the room on Thursday night watching the panel.

"We want to remind people, we were there, we saw what happened," said Dean Phillips, a Democrat from Minnesota. "We know how close we came to the first non-peaceful transition of power in this country," he said.

coup– n. a sudden attempt by a small group of people to take over the government usually through violence

panel – n. a group of people who answer questions, give advice or opinions about something, or take part in a discussion for an audience

carnage – adj. the killing of many people

whine –v. to complain in a way that bothers

summon– v. to order or call for people to appear at a place

transition –n. to act of changing from one state or condition to another