Update Required To play the media you will need to either update your browser to a recent version or update your Flash plugin.
By Susan Shand
02 August, 2018


A committee of the United States Senate is studying the Trump administration's "zero tolerance" policy for migrant families. The policy is directed at individuals who crossed the U.S. border with Mexico. Those who entered the U.S. illegally were detained. The children were held separately from their parents.

On June 20, President Donald Trump signed an order cancelling the family separations after a series of protests across the country.

The boys and girls have been living in shelters in Texas and three other states. They are receiving backpacks filled with clothing, books and other supplies from Comfort Cases, a non-profit group in Maryland. 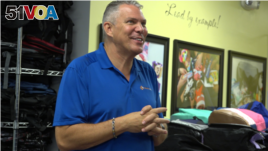 Rob Scheer, cofounder of Comfort Cases — a nonprofit that donates backpacks filled with basic necessities to children in the foster care system.

Rob Scheer is the founder of the group.

"We have children who have walked into our country that needed us. They need us."

Scheer says he and his husband Reece set up Comfort Cases in 2013 partly because of his experience as a child in the U.S. foster care system. Today, the group serves about 39 states, Washington, D.C. and U.S. territories, including Puerto Rico.

Scheer says their hope is to give a child that "sense of dignity" and to provide the children with something to hold their possessions. Children living in foster care are often moved from home to home, and many have only a plastic bag to hold their few belongings.

As a child, Scheer had to move his belongings the same way. Some 40 years later, he and his husband agreed to accept four children from the foster care system as members of their family.

Once Scheer heard about the family separations, he called his team and volunteers and said they could not just sit back and watch what was happening.

"At the end of the day, I don't walk in the shoes of their parents. I can't tell you the reasons why they came to the border or why they entered our country. The only thing that I can tell you is that they're here. And these children need us."

Marli Abramowitz is a volunteer at Comfort Cases. Abramowitz said as soon as news about the separations began to spread, the team prepared and shipped backpacks to McAllen, Texas.

"For the migrant kids, we have special stuffed animals that were made by a woman who donated, I think, a thousand of them...They also get a Spanish book and an English book, or they get a book that's half Spanish, half English."

Linda Walker, who has been volunteering with the nonprofit for the past six months, said she immediately felt the group had an important job.

It had to overcome some administrative problems to reach the children, she explained, but hopes the backpacks hold "everyday necessities," as well as the message that the migrants are welcome here.

migrant – n. someone who moves from place to place, usually to find work

backpack – n. a piece of equipment designed to carry things on one's back

foster care – n. a situation in which a child lives with and is cared for by people who are not the child's parents

dignity – n. the quality of being worthy of respect

charity – n. a group that hel