Update Required To play the media you will need to either update your browser to a recent version or update your Flash plugin.
By VOA
28 December, 2016


Imagine sitting in a classroom and not being able to see a picture that your teacher is showing. Imagine driving a car, not knowing that your vision is so bad, that driving is dangerous to you and others.

For millions of people, that condition is normal.

That is because there are not enough eye specialists, known as optometrists, to diagnose and treat eyesight problems in many poor nations. In some developing countries, there is only one optometrist for every eight million people. 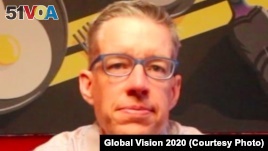 J. Kevin White wearing his glasses. White has developed a system to provide eye testing and glasses to people in developing nations.

That estimate comes from J. Kevin White. He started the group Global Vision 2020. He also is its executive director. Global Vision 2020 is a charity based in Maryland that is working to bring eye tests and low-cost eyeglasses to people in developing nations. Glasses allow people with bad vision to see normally.

"Even if you knew you needed eyeglasses, which most people don't, the opportunity to get help is really, really limited and even the cost is just cost prohibitive."

A person can expect to pay $100 for an eye test and glasses, White said. That is too much for most people in many developing nations where many earn $2 a day or less, he said.

White has developed a low-cost tool that teachers, nurses, and almost anyone can be trained to use and quickly learn if children or adults need glasses.

White demonstrated his system at a coffee shop near Global Vision's office in Easton, Maryland. In less than five minutes, he tested the eyesight of a woman who could not see things well a short distance away. He then picked out the correct lenses for her, and placed them into a frame.

She could then see normally. This meant she could see a group of letters about six meters away. That is what a person with normal vision is expected to see without glasses.

Some people need glasses because they cannot see things that are close to them, such as a book when they are reading.

White says he uses glasses that cost as little as $1.

He uses a tool he calls a USee. It is a frame with a dial on each side. Turning the dial changes the focus of the lenses. When the people being tested say their vision has become clear, the USee shows what lenses are needed to correct their vision.

The lenses then are placed into a frame, and soon students who had trouble can now see what their teacher wrote or a driver can read a roadside sign.

According to the World Health Organization, about 285 million people have eyesight problems. About 90 percent of those with vision problems live in areas where incomes are low, according to the WHO.

Of course, it is helpful to be able to see clearly. For example, White said, studies show that people with vision problems drop out of school at higher rates than those with normal vision. He believes many car accidents are caused by people who need but do not have glasses.

"Almost everything that we do is affected by our vision, so whether we're driving, your economic output. We kind of live in a visual world."

White noted how many people had vision problems in poor nations, especially in Africa, during his days on active duty with the United States Marines. During that time, he helped provide glasses to people who needed them.

After leaving the Marines, White worked to find a low-cost system that would help the many millions of people who do not see well. That search led him to develop USee.

White recently traveled to Mozambique. He is seeking grants that will help pay for a supply of USee lenses and frames that teachers and health officials can use in Mozambique and other countries.

During his trip, White said, he gave an eye test to a regional health care official and found he needed glasses. After the official put on his new glasses, he was surprised at what he could see.

Wearing the new glasses, the official saw for the first time that under the picture of the country's president, his name is written.

"Everyone laughed," White said. They told the health official that all public photos of the president include his name.

White said that the first glass frames he produced were not a success because they did not look good.

Now, he has produced modern-looking, colorful frames. White said people are now excited to wear them.

The people wearing them, he said, look good and see well.

vision - n. the ability to see

diagnose - v. to recognize a disease or eye problem by examining someone

charity –n. an organization that works to help people in need

opportunity - n. the chance to get something done

prohibitive - adj. so costly that people are prevented from using or buying something

lenses - n. a clear curved piece of glass or plastic that is used in eyeglasses

frame - n. the plastic or metal structure that holds the lenses of eyeglasses

dial - n. a round part on a piece of equipment that you turn to operate something

focus - n. a state in which something such as glasses produces a clear picture or image

grant –n. an amount of money given to a person or group that is to be used for a specific purpose