Update Required To play the media you will need to either update your browser to a recent version or update your Flash plugin.
By Dan Novak
05 July 2022

The court ruled 6-3 for the coach with the conservative justices in the majority and the liberals in dissent. The case, Kennedy v. Bremerton School District, was the latest in a series of rulings in support of Christian plaintiffs. A plaintiff is a person who brings a legal action against another in a court of law. 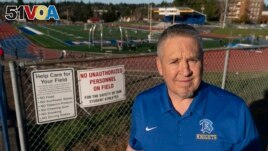 The case forced the justices to balance the religious and free speech rights of teachers and coaches with the rights of students not to feel pressured into joining in religious practices.

The coach, named Joseph Kennedy, would lead a prayer in the middle of the field after football games. He was a coach at Bremerton High School in the northwestern state of Washington. The school asked him not to pray with players while still on duty as a coach after the games. But he continued to do so. The head coach later proposed not to bring back Kennedy.

The liberal justices in the minority said there was evidence that the students felt pressured to join Kennedy's prayers. They argued the prayers permitted him to include his "personal religious beliefs into a school event."

But the justices in the majority pointed out that the coach's prayers came after the games were over. They said the prayers were at a time when Kennedy was not responsible for students and was free to do other things.

Justice Neil Gorsuch wrote for the majority in the ruling. He argued it would be wrong to treat everything public school teachers and coaches say and do as speech open to government control. If that were true, "a school could fire a Muslim teacher for wearing a headscarf in the classroom or prohibit a Christian aide from praying quietly over her lunch in the cafeteria," he wrote.

Dissenting Justice Sonya Sotomayor argued that "This decision does a disservice to schools and the young citizens they serve, as well as to our Nation's longstanding commitment to the separation of church and state."

The First Amendment of the U.S. Constitution protects freedom of speech. It also bans Congress from making laws that establish a religion or prevent people from exercising their religion.

Thomas Jefferson served as the country's third president. He wrote in an 1802 letter to a religious organization that the clause represents a "wall of separation" between church and state.

The Bremerton School District said in a statement that the court's decision undermines the separation required by the Constitution. The school said that it had "followed the law and acted to protect the religious freedom of all students and their families."

The lawyer who represented Kennedy said it would permit the coach "to finally return to the place he belongs – coaching football and quietly praying by himself after the game."

Thirty-four religious groups in the Bremerton, Washington area filed a "friend of the court" brief before last week's decision. The groups include Muslim, Jewish, Hindu, and several different Christian movements. They said Kennedy's actions pressured students into joining him in prayers.

Jewish and Muslim groups warned that the decision could harm the religious rights of non-Christian students.

The National Council for Jewish Women, or NJW, argued that the court's decision brought down the wall between religion and state. The group added, "the impact on people — especially children, who practice a minority religion or no religion — cannot be overstated."

Emma Melton works for the Council on American-Islamic Relations, or CAIR, a Muslim civil rights group. She said in a statement that the "decision further alienates Muslim students, who are already disproportionately impacted by bullying, harassment, and discrimination in school."

Edward Ahmed Mitchell is a top official with CAIR. He told EducationWeek that the decision needs to be enforced equally.

"We know if a Muslim teacher does what this coach did, it could spark a very different reaction, but he or she has the right to do it now."

"Will this be equally applied to all people?" he asked.

Dan Novak wrote this story with additional reporting from The Associated Press.

coach — n. a person who teaches and trains an athlete or performer

dissent — n. a statement by a judge giving reasons why the judge does not agree with the decision made by the other judges in a court case

fire — v. to dismiss from a job

commitment — n. a promise to do or give something

alienate — v. to cause to feel that she or he no longer belongs in a particular group, society, etc.

disproportionately — adj. having or showing a difference that is not fair, reasonable, or expected

spark — v. an action, occurrence, etc., that causes something larger to happen