Growing Food From Air in Nigeria

Update Required To play the media you will need to either update your browser to a recent version or update your Flash plugin.
By Alice Bryant
04 August, 2019


A group of farmers in Nigeria is using a technology-based method to grow crops from moisture in the air.

The method, known as aeroponics, does not involve soil. Instead, plant roots hang in the air. The roots take in a nutrient solution from a watery mist. 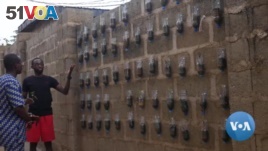 Growing Food in the Air for Nigeria

Aeroponics is not well-known in Nigeria, but farmers there are working to make the technique more popular.

The technique could make a big difference in places like the city of Abeokuta. Violence and desertification -- the process by which fertile land becomes desert -- have made huge amounts of land unfarmable.

Biochemist Samson Ogbole is popularly known as Nigeria's smart farmer. He and his team are growing crops without soil at the technology-based farm they started three years ago in Abeokuta.

Ogbole say they are on a campaign to end seasonal food scarcity in Nigeria.

But setting up the aeroponic farm was not easy. It required financing of more than $180,000, Ogbole said. And, some people in Abeokuta were very much against this non-traditional method of farming.

"We were called wizards, demons, that we are doing something unnatural."

He added that it took a lot of effort to change people's minds about aeroponics.

In the north, communal conflict, militancy and desertification are the top reasons the farmland is being lost. And only 49 percent of the land is fertile, a situation that worries traditional farmers like Abubakar Ibrahim.

"I don't have any other place that I'll go to farm apart from here," he said. "And here, already the land has become weak."

Aeroponics, however, does not require traditional farm work or much land. Nutrients for the plants are controlled by a recycling system, greatly increasing productivity.

Ojo noted that with aeroponics, farmers can quickly increase planting materials, especially when using the method on root vegetables such as cassava and yam. So, his group strongly supports the technology.

The agricultural industry represents about 40 percent of Nigeria's economy. The government wants to greatly expand this percentage.

For now, most farmers lack the technical knowledge to increase productivity. They also need access to high-quality seeds to guarantee better harvests.

Timothy Obiezu reported this story for VOA News. Alice Bryant adapted it for Learning English. George Grow was the editor.

moisture – n. a small amount of a liquid (such as water) that makes something feel wet

wizard – n. a person who has magical powers

recycling – n. the act of making something new from something that has been used before