Growing Support in US for Campaign Against Islamic State

Update Required To play the media you will need to either update your browser to a recent version or update your Flash plugin.
By Anne Ball
27 February, 2015


A national survey finds that twice as many Americans approve than disapprove of the U.S. military campaign against the so-called Islamic State.

The Pew Research Center in Washington, DC published the survey. Researchers found that 63 percent of Americans support the campaign against the Islamic State, the group also known as ISIL or ISIS.

Carroll Doherty is Director of Political Research for the Pew Research Center. He says now nearly half of Americans are willing to consider sending ground forces to fight the Islamic State group. 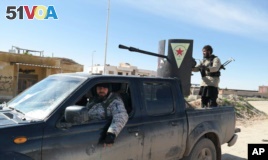 "Equally important you see growing support for the possible use of U.S. ground forces to deal with this threat. Forty-seven percent favor the use of ground troops now."

Mr. Doherty says that number is up from 39 percent since last October.

"A significant shift and given that the public has long been wary of using U.S. ground forces in conflicts around the world, 47 percent is a pretty sizeable share of the public supporting that view."

But Mr. Doherty says support for ground troops could change if sending American soldiers becomes more of a real possibility.

U.S. government officials have not yet formally debated sending American ground troops to fight in Iraq and Syria.

Democrats are three times as likely as Republicans to say they are concerned that the U.S. will go too far in getting involved in the fight. Some Americans are wary after years of fighting wars in Afghanistan and Iraq.

"While there is a clear desire to stop this group, there is also this nagging, lingering concern over yet another deep, long-term U.S. involvement in the region. And that concern is particularly felt by Democrats, more than Republicans."

Mr. Doherty says the survey shows Americans know about these stories and are reacting to them.

"Americans have been seeing a steady stream of just horrific acts by ISIS, you know, between the beheadings and other atrocities. And you know, the news reports about the growing power of this group. And the public is reacting to it and saying that, you know, more needs to be done to stop ISIS."

In February, the media reported that another Islamic State hostage, 26-year-old American Kayla Mueller, died in Syria. The public does not know how she died. Pew researchers found that most Americans still support the U.S. government policy of not paying for hostages held by terrorist groups.

James Comey is the director of the FBI. He says the U.S. government is following 150 people suspected of terrorist connections who traveled from the U.S. to Syria.

On February 25, authorities arrested three men in New York and Florida who, they say, have connections to Islamic militants. And in Minnesota, a threatened attack against the Mall of America has increased Americans' fears of another terrorist act on U.S. soil.

Anne Ball wrote this story for Learning English. Hai Do and Kelly J. Kelly were the editors.

survey – n. an activity in which many people are asked questions to gather information about what most people think or do; a poll

partisan – adj. strongly supporting one group or cause over another

wary – adj. not having complete trust in someone or something