Update Required To play the media you will need to either update your browser to a recent version or update your Flash plugin.
By Bryan Lynn
26 October, 2016


Philippine President Rodrigo Duterte says he wants to reduce ties with the United States and strengthen relations with China.

This has raised questions about what this will mean for the Association of South East Asian Nations (ASEAN).

The Philippines is set to take over the chairmanship of ASEAN in 2017. The 10-nation group marks its 50th anniversary next year. Both the United States and China are partners with ASEAN. 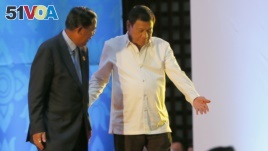 The last ASEAN meeting in July centered on security issues including the dispute over the South China Sea. Some members are concerned about China's rising influence. Some have also raised questions about what America's future role in ASEAN should be.

Duterte has said repeatedly that the Philippine-U.S. relationship is not as important now as in the past. He has also sharply criticized U.S. officials for speaking out against his bloody anti-drug campaign in the Philippines.

In Japan, Wednesday, he also said he wanted all foreign troops out of the Philippines within "maybe two years." The U.S and the Philippines agreed in 2014 to let the American military use five bases in the country. Duterte took office in June.

During a recent visit to Beijing, Duterte announced a "separation" with the United States in favor of China. However, he then took back the strong language after returning home to the Philippines. He said what he really meant was "separation of a foreign policy."

Carl Thayer is a defense analyst with the University of New South Wales in Australia. He says Duterte should avoid making such statements without first discussing the policies with other ASEAN members.

Thayer said one good thing to come out of Duterte's visit to China was a possible easing of tensions over conflicts in the South China Sea.

"The South China Sea is no longer the issue that it was. And the way Duterte is handling it, it has taken the sting out of that issue and provided China with incentives to pick up his diplomatic initiative."

The Philippines and China have competing claims over large areas of the South China Sea. In July, an international court ruled in favor of Manila in the dispute, but China rejected the decision. Taiwan and three ASEAN members - Vietnam, Malaysia and Brunei – also have claims in the sea.

Dennis Quilala is a professor at the University of the Philippines. He agrees that Duterte's new China policy seems to have helped ease tensions in ASEAN. But he still has concerns about the possible effects in the future.

Thitinan Pongsudhirak is director of the Bangkok-based Institute of Security and International Studies. He says if Duterte's foreign policies keep changing, it could affect the balance of power in ASEAN. He noted the already strained relations between Washington and Manila, as well as the U.S. and Thailand.

"So two allies of America in South East Asia are relatively estranged now. This is going to be a dramatic tipping point for China-U.S. relations in the region."

Thitinan added that recent events show China's influence keeps growing in the ASEAN nations of Cambodia, Laos, Myanmar and Thailand. He said this means the United States will have to rethink its own plan to react to this new balance of power.

Ron Corben reported this story for VOA News. Bryan Lynn adapted it for VOA Learning English. was the editor.

We want to hear from you. What do you think about a possible shift in the balance of power in ASEAN? Write to us in the Comments section, and visit 51VOA.COM.

role – n. part played by a person or thing in a particular situation

sting – n. a hurtful effect of something

incentive – n. something that encourages someone to act in a certain way

initiative – n. a plan or activity done to solve a problem