Women have claimed a majority in the electronic revolution.

Separate studies show that women make up more than half of the world's video game players. Females are more likely to grab a smart phone or a tablet for a casual game.

Competitive online gaming is still a male-dominated sport. But that is changing. 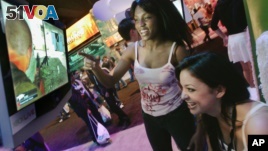 Only three years ago, women were 49 percent of "gamers," says the Internet Advertising Bureau. Now, women are 52 percent of gamers, the bureau says.

Women are embracing the gaming industry as professionals, too. Some employ coaches and staffs. Some exceptional players -- like South Korea's ToSsGirl, or Scarlett of Canada – use gamer nicknames. They earn professional endorsement deals.

The stereotype of the teenage gaming addict is becoming a myth. A study by Pixwoo.com – a social network for gamers – says the average player is 35 years old. The typical player is a parent with one child and works 32 hour a week.

In all, 1.2 billion people play video games, says the 2013 State of Online Gaming Report. It mentioned "the rising power of women and mothers within the online gaming sector." One report statistic noted that 73 percent of Turkish women aged 35 to 44 play online games.

International gaming expositions and shows are planned throughout Europe and Australia. Paris is hosting a games week that began October 28.

Hey, are you a gamer? Write to us in the Comments section and on 51VOA.COM.

tournament – n. a competition or series of contests that involves many players or teams and that usually continues for at least several days

addict – n. a person who likes or enjoys something very much and spends a large amount of time doing it