Update Required To play the media you will need to either update your browser to a recent version or update your Flash plugin.
By VOA
29 July, 2014

Imagine forgetting everything you have ever done in life –jobs you held, a marriage you built, the children you raised, your friends, your travels, everything. For many older people such severe memory loss is a reality.

But in Tennessee, one man works to connect senior citizens with their past to regain their sense of self. 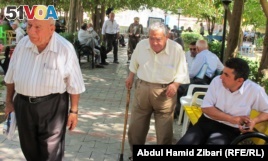 Use guided conversations to tap into the memories of the older people in your life. (International Day of Older Persons)

Doug Oliver and his friend Geneva McElroy are talking about old times.

Oliver: "Tell me something that you and HC (her husband) did together that was just fun and funny at the same time, that you remember..."

McElroy: "Well, we was on our way to church one time, and I can’t think what it was, he told something that my niece ..."

However, the two friends are not just having a simple talk about the past. Mr. Oliver is using a technique called guided conversations to help Ms. McElroy remember her past.

Guided conversations are planned, purposeful talks. They are designed to help those with memory loss. But the point is not only remembering the past, it is also recovering a sense of self-worth.

"They can see what they have done that has or will impact the future and it lifts their mood. Many times they will realize that they are and were important; that they have something to offer."

To understand how guided conversations work it is important to understand an important detail about the brain. Short term and long term memories are stored in different areas of the brain. 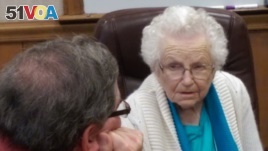 "One of the hidden benefits that many elders have, even when they are having trouble with short-term memory, is that their long-term memories are usually intact for a much longer time."

For more than twenty years, Mr. Oliver worked as a mental health care provider. He is retired now.

But he volunteers at a daycare center for senior citizens in the southern U.S. city of Nashville, Tennessee.

This is where he uses the guided conversation memory technique. He finds it useful in fighting depression in older people.

Oliver: "If we were to talk about HC just for a minute. He passed away six months ago, was it?"

"Without trying to lift the depression a little bit, people can languish quickly and deteriorate, and so part of the purpose is to take that healthy part of their thinking and get that firing as passionately as you can."

Mr. Oliver says it is important to get patients to connect the past to the present and the future. These connections help a person reach memories that are buried deep away in the brain. To do this, he uses memories of good experiences and bad -- successes and losses.

"[It] Helps them to determine what they learned from those incidences, those memories. How does that apply to them and their families in the present, and what impact do they think they have had on the future."

Mr. Oliver says sometimes he thinks about quitting. He has an eye disease and cannot see well. For him, getting to the daycare center and home again can be difficult.

"Each time I consider that, I actually step back and say, ‘No. I am where I need to be right now. And I am doing what I should be doing.'"

But Mr. Oliver says he has always been interested in older people and the stories they tell. He says that listening to these stories brings history to life in a very personal way.

This report is based on a report by VOA correspondent Mike Osborne.