Update Required To play the media you will need to either update your browser to a recent version or update your Flash plugin.
By VOA
29 October, 2014

Mr. Sata died Tuesday of an unidentified sickness. He was 77.

Guy Scott is 70 years old. He is Africa’s first white president since F.W. de Klerk governed South Africa from 1989 to 1994. 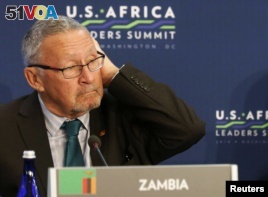 Zambian officials said the country will hold elections to choose its next president within three months.

Mr. Xu was vice chairman of China’s Central Military Commission. China has not yet announced charges against him. However, officials banned him from the Chinese Communist Party and withdrew his title as general.

U.S. airlines say current software cannot identify all travelers coming from Liberia, Guinea, and Sierra Leone. These are the countries with the most severe Ebola problems.

Airline officials say they may not able to know where a passenger began his or her travels. There are no direct flights to the U.S. from any of the three countries.

Officials say they also worry that a travel restriction for West African countries might frighten the public and reduce travel generally.

A group of 50 rebels from the Free Syrian Army has arrived in the Syrian city of Kobani. They plan to help Kurdish forces in their month-long battle with fighters of the Islamic State militant group.

Also Wednesday, a group of Iraqi Kurdish fighters flew into an airport in southeastern Turkey. They then traveled toward the Syrian border with Turkish security escorts. About 90 to 100 Kurdish fighters were expected to join the fight soon in Kobani.

interim – adj. used or accepted for a limited time : not permanent

bribe – n. something valuable (such as money) that is given in order to get someone to do something.

escort –n. a person or group of people who go with someone to give protection or guidance

Now it’s your turn to use these Words in the News. In the comments section, write a sentence using one of these words, and we will provide feedback on your use of vocabulary and grammar.