Update Required To play the media you will need to either update your browser to a recent version or update your Flash plugin.
By Cynthia Kirk
02 June, 2012

SARA LONG: And I'm Sarah Long with the VOA Special English program, PEOPLE IN AMERICA. Today we tell about the life of award-winning poet Gwendolyn Brooks. She was the first African American to win a Pulitzer Prize for Literature.

SHIRLEY GRIFFITH: Gwendolyn Brooks wrote hundreds of poems during her lifetime. She had more than twenty books published. She was known around the world for using poetry to increase understanding about black culture in America. 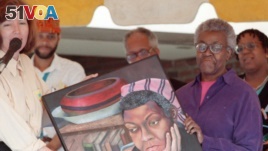 Gwendolyn Brooks, the first black person to win a Pulitzer Prize, holds a portrait of herself painted by artist Anne Cressey McGraw Beuchamp
Gwendolyn Brooks wrote many poems about being black during the nineteen forties and nineteen fifties. Her poems described conditions among the poor, racial inequality and drug use in the black community. She also wrote poems about the struggles of black women.

But her skill was more than her ability to write about struggling black people. She was an expert at the language of poetry. She combined traditional European poetry styles with the African American experience.

SARA LONG: Gwendolyn Brooks once said that she wrote about what she saw and heard in the street. She said she found most of her material looking out of the window of her second-floor apartment house in Chicago, Illinois.

Here she is reading from her nineteen forty-five collection, "A Street in Bronzeville."

GWENDOLYN BROOKS: "My father, it is surely a blue place and straight. Right, regular, where I shall find no need for scholarly nonchalance or looks a little to the left or guards upon the heart."

SHIRLEY GRIFFITH: In nineteen fifty, Gwendolyn Brooks became the first African American to win the Pulitzer Prize for Literature. She won the prize for her second book of poems called "Annie Allen." "Annie Allen" is a collection of poetry about the life of a Bronzeville girl as a daughter, a wife and mother. She experiences loneliness, loss, death and being poor.

Ms. Brooks said that winning the prize changed her life.

Her next work was a novel written in nineteen fifty-three called "Maud Martha." "Maud Martha" received little notice when it first published. But now it is considered an important work by some critics. Its main ideas about the difficult life of many women are popular among female writers today.

SARA LONG: Gwendolyn Brooks wrote poems about the black experience in America. She described the anger many blacks had about racial injustice and the feeling of being different. She used poetry to criticize those who did not show respect for the poor. Yet for all the anger in her writing, Gwendolyn Brooks was considered by many to be a gentle spirit and a very giving person.

By the early nineteen sixties, Ms. Brooks had reached a high point in her writing career. She was considered one of America's leading black writers. She was a popular teacher. She was praised for her use of language and the way people identified with her writing.

SHIRLEY GRIFFITH: Gwendolyn Brooks was born in Topeka, Kansas in nineteen seventeen. But she grew up in Chicago. She began writing when she was eleven years old. She mailed several poems to a community newspaper in Chicago to surprise her family.

In a radio broadcast in nineteen sixty-one, Ms. Brooks said her mother urged her to develop her poetic skills:

GWENDOLYN BROOKS: My mother took me to the library when, I guess, I was about four or five. I enjoyed reading poetry and I tried to write it when I was, I think, about seven, at the time that I first tried to put rhymes together. And I have loved it ever since."

SARA LONG: Gwendolyn Brooks married Henry L. Blakely in nineteen thirty-nine. Henry Blakely was a young writer who later published his own poetry. They lived in Chicago for the next thirty years, divorced in nineteen sixty-nine, but re-united in nineteen seventy-three. They had two children, Nora Brooks Blakely and Henry Blakely.

Throughout her life, Ms. Brooks supported herself through speaking appearances, poetry readings and part-time teaching in colleges. She also received money from organizations that offered grants designed to support the arts.

SHIRLEY GRIFFITH: One of Gwendolyn Brooks's most famous poems is called "We Real Cool". It is a short poem that talks about young people feeling hopeless:

We real cool. We

SARA LONG: By the end of the nineteen sixties, Gwendolyn Brooks's poetry expanded from the everyday experiences of people in Bronzeville. She wrote about a wider world and dealt with important political issues. She won praise for her sharper, real-life poetic style.

Gwendolyn Brooks was affected by the civil rights struggles and social changes taking place in America. She began to question her relations with whites. She said she felt that black poets should write for black people.

That became evident in her next collection of poetry in nineteen sixty-eight called "In the Mecca." Critics suggested Ms. Brooks had become too political and seemed to be writing only for black people. Her new poems received little notice in the press.

In some of her poems, Gwendolyn Brooks described how what people see in life is affected by who they are. One example is this poem, "Corners on the Curving Sky":

Our earth is round, and, among other things

That means that you and I can hold

Points of view and both be right.

The difference of our positions will show

Stars in your window. I cannot even imagine.

Your sky may burn with light,

While mine, at the same moment,

Still, we must choose how we separately corner

The circling universe of our experience

Once chosen, our cornering will determine

The message of any star and darkness we

SARA LONG: Although her poetry did not receive much notice in the press, Gwendolyn Brooks continued to receive honors. She was chosen poet laureate of the state of Illinois in nineteen sixty-eight. In nineteen seventy-six, she became the first black woman to be elected to the National Institute of Arts and Letters. She received a lifetime achievement award from the National Endowment for the Arts in nineteen eighty-nine. And she was named the nineteen ninety-four Jefferson Lecturer by the National Endowment for the Humanities. That is the highest honor given by the federal government for work in the humanities.

Ms. Brooks once said that of all the awards she received, there was only one that meant a lot to her. It was given to her at a workshop in an old theater in Chicago. She said: "I was given an award for just being me, and that's what poetry is to me – just being me."

SHIRLEY GRIFFITH: Although she was well known, Gwendolyn Brooks lived a quiet life. She said her greatest interest was being involved with young people. She spent time giving readings at schools, prisons and hospitals. She also attended yearly poetry competitions for Chicago children. She often paid for the awards given to the winners.

In nineteen sixty-two, President John F. Kennedy asked Ms. Brooks to speak at a Library of Congress poetry festival. Soon after, she began teaching creative writing at universities in Chicago, New York, and Wisconsin. She liked working with students. She felt that young people would lead the way in healing the wounds of the United States civil rights movement of the nineteen sixties. To honor her work, Chicago State University formed the Gwendolyn Brooks Center for Creative Writing and Black literature.

Doctors discovered Ms. Brooks had cancer in November, two thousand. She died December third at her home in Chicago. She was eighty-three.

The funeral service was held on the South Side, the same area of the city that had been a window for much of Ms. Brooks's poetry. The service was at times filled with laughter. There were warm remembrances of a woman whose life and words had touched people forever. African drums sounded and dancers leaped.

SARA LONG: And I'm Sarah Long. Join us again next week for another PEOPLE IN AMERICA program on the Voice of America.
Related Articles
go top