Update Required To play the media you will need to either update your browser to a recent version or update your Flash plugin.
By Dan Friedell
04 January, 2016


Scientists say a huge percentage of bird species are in danger because their habitats, or homelands, are disappearing.

Traditional migration paths take birds through countries that are not protecting locations to stop, rest and feed.

The scientists studied the migration, or flight, paths, of almost 1,500 species. They decided that 91 percent of them passed through dangerous areas. 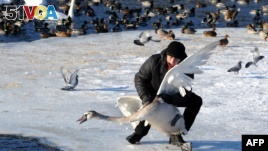 An ornithologist catches a swan on Lake Drozdy near the Belarus capital Minsk, on January 23, 2014, to ring the bird for its future identification.

The major danger for migratory birds is development. Building and paving has covered over nature where birds stop and feed as they move from one part of the world to another.

For example, a bird called the bar-tailed godwit migrates from its breeding grounds in the Arctic. It flies all the way to the southern hemisphere in Australia and New Zealand. Along the way, the small birds stop at Yellow Sea mudflats in China, North Korea and South Korea.

One of the scientists who worked on the study says "many of these critical sites have been lost to land reclamation owing to urban, industrial and agricultural expansion."

The problem, according to investigators, is that many of these small birds die along their migration because they don't have a safe place to eat and rest. There is no place to restore their energy for the next leg of their journey.

"They simply perish along the way," says one of the scientists.

Countries in North Africa, Central Asia and those along the coasts of East Asia are having the most difficult time conserving land.

The scientists say these countries do not have enough areas that are safe for birds. In addition, many of the sanctuaries do not overlap enough with the paths of migrating birds.

One species that is now extinct is the Eskimo curlew.

"Our world gets poorer every time we lose a species," one of the scientists says.

The researchers say countries need to work together and come up with safe stopover areas for birds that pass through their boundaries.

One scientist who is not involved in the report tells the Los Angeles Times that while some habitats are changing, more work can be done to make urban areas safe for birds.

He says small changes – like planting more native plants or keeping cats out of areas birds would be likely to use – could make a big difference.

The journal Science published an article in early December by researchers from the Centre of Excellence for Environmental Decisions in Australia.

Dan Friedell wrote this story for Learning English based on reporting from Reuters and The Los Angeles Times. Kathleen Struck was the editor.

Do you think migrating birds would be safe in your country? We want to hear from you. Write to us in the Comments section or on 51VOA.COM.

breeding ground – n. a place where animals go to breed

habitat – v. the place or type of place where a plant or animal naturally or normally lives or grows

perish – v. to disappear or be destroyed : to cease to exist