Half of World’s Sandy Beaches Could Disappear by 2100

Update Required To play the media you will need to either update your browser to a recent version or update your Flash plugin.
By John Russell
07 March 2020


A new study says up to one-half of the world's sandy beaches could disappear by 2100 because of climate change. Australia, Canada, Chile, Mexico, China and the United States would be among the hardest hit, the research shows.

The study was published in the journal Nature Climate Change. Michalis Vousdoukas was the lead investigator. "Touristic areas which have sandy beaches as their main selling point will probably face strong consequences," he said.

Aside from economic value, beaches play an important environmental role. 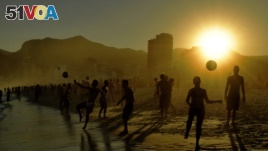 "Sandy beaches are important habitats supporting a wide range of species. They also protect the coast from the effects of storms, so without sandy beaches other inland environments can be affected by the effects of waves and saltwater intrusion," Vousdoukas added.

Global sea levels have increased in recent decades. Major causes include melting glaciers and thermal expansion. Thermal expansion is the reaction of matter to increases in temperature. Water expands as it warms.

Australia would lose more sandy shoreline than any other country, with 14,849 kilometers projected to be gone by 2100.

Canada is second in projected losses.

The United States could lose up to 5,530 kilometers.

Will Dunham reported on this story for Reuters. John Russell adapted it for Learning English. Caty Weaver was the editor.

oceanography – n. a science that studies the ocean

intrusion – n. from the verb intrude - to come or go into a place where you are not wanted or welcome