Half of Teenagers in US and Japan 'Addicted' to Smartphones

Update Required To play the media you will need to either update your browser to a recent version or update your Flash plugin.
By VOA
07 October, 2017


About half of teenagers in the United States and Japan say they are "addicted" to their smartphones.

To be addicted means an individual is unable to stop doing something -- in this case, using the telephones.

University of Southern California, or USC researchers asked 1,200 Japanese about their use of electronic devices. The researchers are with the Walter Annenberg School for Communications and Journalism. Their findings were compared with an earlier study on digital media use among families in North America.

Willow Bay is head of the Annenberg School. She said, "Advances in digital media and mobile devices are changing the way we engage not only with the world around us, but also with the people who are the closest to us." 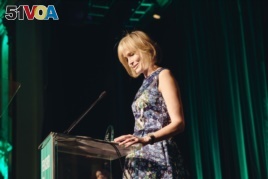 James Steyer is founder of Common Sense Media, an organization which helped with the study.

He said, "This is a really big deal. Just think about it, 10 years ago we didn't even have smart phones."

Among the findings in the USC report: 50 percent of American teenagers and 45 percent of Japanese teens feel addicted to their mobile phones.

Sixty-one percent of Japanese parents believe their children are addicted to the devices. That compares to 59 percent of the American parents who were asked.

Also, more than one in three Japanese parents feel they have grown dependent on electronic devices, compared to about one in four American parents.

Leaving your phone at home is ‘one of the worst things'

"Nowadays, one of the worst things that can happen to us is, like, oh, I left my phone at home," said Alissa Caldwell, a student at the American School in Tokyo. She spoke at the USC Global Conference 2017, which was held in Tokyo.

Many respond immediately to messages

About seven-in-10 American teens said they felt a need to react quickly to mobile messages, compared to about half of Japanese teens.

Naturally, that hourly usage stops when people are sleeping, the researchers said.

The devices are a greater cause of conflict among teens and parents in the United States than in Japan. One in three U.S. families reported having an argument every day about mobile device use. Only about one in six Japanese families say they fight every day over mobile devices.

Care more about devices than your children?

But 20 percent of Japanese teens said they sometimes feel that their parents think their mobile device is more important than they are. The percentage of U.S. teens saying they feel this way is six percent.

Willow Bay, the Annenberg School of Communications dean, said the research raises critical questions about the effect of digital devices on family life.

She said the cultural effects may differ from country to country, but "this is clearly a global issue."

We want to hear from you. Write to us in the Comments Section and share your views on 51VOA.COM. How often to you use mobile devices? Do you think it affects your relationships with your parents? Your friends? And is that effect more positive than negative, or more negative than positive?

engage - v. to do something

mobile – adj. something with the ability to be moved; changeable