Update Required To play the media you will need to either update your browser to a recent version or update your Flash plugin.
By Caty Weaver
24 October, 2013

On we tell you about a robot made with the help of medical technology.

Then, it is all about Halloween. How much will the holiday cost Americans this year? What is everybody wearing? And which music will truly scare those trick and treaters? 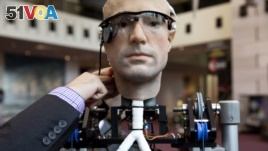 He does not walk very well. He does not dance. But the two meter tall robot holds great promise for the future.

He is called The Incredible Bionic Man. He was built from artificial body parts and organs.

The robot is the subject of a documentary film from the Smithsonian. The film's presenter, Bertolt Meyer, says it explores the question, ‘how far has medical technology come?'

"What parts of the human body can we already replace today? If we get all of the spare parts that exist and put them together in one piece what will it look like? And the result is, it looks like this."

Bertolt Meyer is a psychologist with the University of Zurich, in Switzerland. Like the Bionic Man, the professor has a bionic hand. The robot also has 27 other man-made body parts.

The Bionic Man's parts were borrowed from some of the world's leading researchers. One is Joan Taylor, a professor of pharmaceutics at De Montfort University in the British city of Leicester.

"These are important not so much from the robotic point of view but from the contribution to future medicine."

And those possibilities are huge, says Bertolt Meyer.

"This project shows that we can already replace a lot of broken parts and in the near future, technology might do away with many disabilities and with many diseases and illnesses, and society at large will benefit from them."

But he says the Bionic Man is not a project about replacing human beings.

"There is no way to replace the human. There is no artificial brain and all of these devices are meant to interface with the human body."

You can learn more about the Incredible Bionic Man and robotics on the Smithsonian Channel website. We have a link on our own website, 51voa.com. 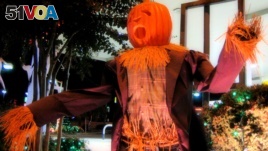 A Pumpkin-Headed Halloween Scarecrow
Next Thursday is the scariest day of the year in America. No, it's not tax day. It is Halloween!

Many people, young and old, are busy preparing. They are getting their costumes ready, looking forward to making a change in appearance on the big day. Others are adding Halloween or seasonal decorations around their home and buying candy. Like most holidays, Halloween can be a costly event.

In fact, the National Retail Federation says Americans are expected to spend about $2.6 billion just for costumes. It says the special clothing is not just for children either. Adults also dress up and some of them even dress up the pet dog or cat!

The National Retail Federation gathers information about American shopping and sales of goods. It says Americans on average will spend about $75 dollars for the holiday. This includes costumes, candy and decorations. The group says total spending is expected to be $6.9 billion.

That is a big number. But, it is less than the amount Americans spent last year. Halloween 2012 cost celebrants about eight billion dollars.

The National Retail Federation says fewer Americans are expected to take part in the holiday this year. In 2012, the group says, 170 million people celebrated. That was an all-time high. This year, it expects fewer than 160 million people will mark the holiday.

And what are the millions wearing this year? The group says the number one costume for young children is that of a princess. Animal costumes are next. Batman characters are rated third.
The favored look for adults is the costume of a witch. Batman and vampires come second and third.

The pumpkin costume is most popular for dogs and cats.

One new costume this year is based on a character in the popular television show "Breaking Bad." The TV series is about a chemistry teacher who starts making the illegal drug methamphetamine to sell. The costume looks like the protective suit and gas mask worn in the meth laboratory. But, we do not expect it to be seen on the average trick-or-treater! 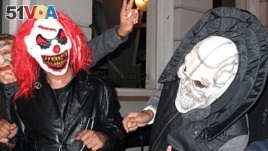 Halloween night in the Georgetown area of Washington, D.C.
We are going to stay with the Halloween theme as we take a listen to some scary songs. We are not going to play "Ghostbuster" or "Monster Mash." These are truly unsettling songs about the dark side of humanity.

Katherine Cole is our DJ today.

We start with musician Suzanne Vega. In 1992 she released her fourth album "99.9 Fahrenheit." It included this creepy hit "Blood Makes Noise." The song reached number one on Billboard magazine's Modern Rock chart.

The American rock band, the Violent Femmes, have produced several dark songs, including "Nighmares." But "Country Death Song" is our pick for darkest. It is about a man who calmly plans and carries out the murder of his family.

"Dead Souls" is a Joy Division song. The band first recorded it in 1979. It tells about a man haunted by voices from evil people of the past.

Finally, we leave you with Nick Cave and the Bad Seeds singing "Red Right Hand." The song warns people not to trust a tall handsome man with a red right hand. It says he will get you all those things you think you want, like money and cars. But, you will pay dearly for them in the end.

Do you have a question about American life, people or places? Send an e-mail to learningenglish@voanews.com. We might answer your question in a future show.