Update Required To play the media you will need to either update your browser to a recent version or update your Flash plugin.
By Anna Matteo
16 June, 2018


Welcome to Words and Their Stories from VOA Learning English.

On this program we explore common expressions in American English.

In the United States on the third Sunday of June we celebrate Father's Day! So, today we celebrate fathers with some expressions that use the word "father" and "dad."

Success has many fathers but failure is an orphan.

An orphan is a child whose parents have died. Without parents, orphans can often feel alone in the world. There is no adult to claim them, so to speak. 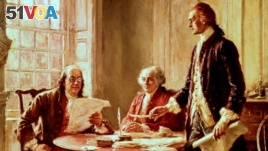 We can say the same about failures. Often people, do not want to claim them as their own. People may not want to take ownership, for example, of a project at work that is a complete bust -- you know, a failure.

On the other hand, it is not uncommon for people to fight over ownership of a big success. They always want to be on the right side of history.

You get the idea.

So, this idiom means that people like belonging to a successful cause but they distance themselves from a failed one.

Here's how you can use it.

Let's say a new business opens in your community. Everyone is excited about it! Some even invest money. It is the talk of the town. Then, it fails. People who once supported it don't seem to remember supporting it.

When those people say to you, "Oh, I knew it would fail. It was doomed from the very beginning." You can say to them, "Success has many fathers but failure is an orphan."

Now, you could say that creating the United States of America was a success. And there is a group of men who are famous for being on the right side of history.

We call them the Founding Fathers.

We capitalize these two words when we are talking about any member of the group who wrote the United States Constitution in 1787. Some of the most famous Founding Fathers are George Washington, Thomas Jefferson, John Adams and Benjamin Franklin.

However, following the success of the musical Hamilton, perhaps Alexander Hamilton has temporarily won the title of "most famous" Founding Father.

But Founding Fathers aren't just found in history books and on the Broadway stage. We also use this term in other situations.

A founding father is a person who starts or develops a new movement, idea or some other big concept. Used this way, however, we do not capitalize "founding father."

The Founding Fathers of the U.S. are highly respected and admired by most people. Our next type of father isn't.

Not all dads are the greatest. In fact, some leave their families and provide no money to help to raise their children. We have a special name for these dads – deadbeat dads.

Just for the record, some moms do this, too. But we'll have to cover that term next Mother's Day!

Anna Matteo wrote this for VOA Learning English. Caty Weaver was the editor. "Who Lives, Who Dies, Who Tells Your Story" from Hamilton the Musical.

[WASHINGTON AND COMPANY]
Who lives
Who dies
Who tells your story?

[BURR]
But when you're gone, who remembers your name?
Who keeps your flame?

the talk of the town

doom – v. to make certain the failure or destruction of

respected – v. to consider worthy of high regard

admired – v. to feel respect and approval for (someone or something)