Update Required To play the media you will need to either update your browser to a recent version or update your Flash plugin.
By Dan Friedell
26 June, 2017

The world met Harry Potter, the boy wizard, 20 years ago.

J.K. Rowling's first book about Harry and his friends at Hogwarts School of Witchcraft and Wizardry was released on June 26, 1997.

The publisher, Bloomsbury, only released 500 copies to stores in Britain and sent 500 to British libraries.

Now, thanks to 450 million more copies of the first book and six others, Harry Potter and his friends are known around the world.

Adults and children loved the books. But 12 publishers rejected the first one, known in many countries as "Harry Potter and the Philosopher's Stone."

That book, and the six others that followed, also became movies. The actor Daniel Radcliffe played Harry. Emma Watson played his friend Hermione.

Rowling wrote the first book when she was unemployed and receiving assistance from the government. Her marriage had ended in failure, and she had a young child. 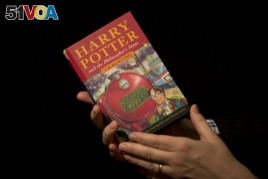 An original copy of "Harry Potter and the Philosopher's Stone."

Things have changed. Some observers believe Rowling is now one of the richest women in the world. She gives a lot of her money to good causes.

On Twitter, Rowling noted the anniversary of the first Harry Potter book. She wrote: "20 years ago today a world that I had lived in alone was suddenly open to others. It's been wonderful. Thank you."

The comments were re-tweeted and liked about 800,000 times on social media.

Many other people also posted messages about Harry Potter. If they used the hashtag #HarryPotter20, Twitter added an emoji of Potter's well-known glasses and lightning bolt scar.

People wrote things like "Harry Potter is eternal," and, "happy anniversary to the book series that forever changed my life in more ways than one."

The College Board produces the SAT, a test widely used for college admissions. Even the College Board tweeted about Harry Potter, writing: "These books will always be magical."

Many teachers wrote that the series helped their students get interested in reading books.

Do you remember reading your first Harry Potter book? We want to know. Write to us in the Comments Section or on 51VOA.COM.

wizard – n. a person who is skilled in magic or who has magical powers : a sorcerer or magician

emoji – n. a small image used to express an idea by people writing on computers or mobile phone

scar – n. a mark that is left on your skin after a wound heals