Update Required To play the media you will need to either update your browser to a recent version or update your Flash plugin.
By VOA
07 June, 2017


Harvard University says it has canceled offers to admit at least 10 students after it found they exchanged offensive memes on social media.

The university's student newspaper, The Harvard Crimson, reported the move on Monday.

The Crimson reported that the individuals connected through the Harvard College Class of 2021 Facebook group. It said they traded memes and messages with a private Facebook group, which was set up last December. 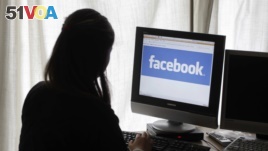 FILE - A girl looks at Facebook on her computer in Palo Alto, California.

Those memes included images making fun of sexual abuse, racial minorities and the deaths of children.

For example, one student in the private group called the imagined hanging of a Mexican child "piñata time," The Crimson noted. Others made jokes about the Holocaust, Germany's systematic killing of Jews and others during World War II.

A Harvard spokeswoman did not comment, saying the university does not discuss the admission of individual students. The university tells accepted students that an offer of admission can be canceled for a number of reasons. They include behavior that "brings into question (student) honesty, maturity or moral character."

The Harvard Class of 2021 Facebook group had about 100 members. Later, some of them then created the smaller, private Facebook group. They shared the offensive images and messages in this group.

In April, Harvard officials sent letters to some of the members, asking them to explain their offensive posts. The students were told the school was reconsidering its offer of admission. The admissions office also said the students should not attend Harvard's freshmen visiting event in April, the Crimson reported.

About a week later, at least 10 were told their offers were canceled, the newspaper said.

Jessica Zhang was a member of the larger Facebook group, Class of 2021.

"A lot of students were excited about forming group chats with people who shared similar interests," she told The Crimson in an email.

She said the group began because "someone posted about starting a chat for people who liked memes."

Zhang told The Crimson she did not post in the smaller group.

Cassandra Luca told the student newspaper that some members of the Class of 2021 group had suggested a group that posts more "R-rated" memes. Luca will also start taking classes at Harvard later this year.

"They were like, ‘Oh, you have to send a meme to the original group to prove that you could get into the new one,'" Luca said.

Neither Zhang's nor Luca's offers of admission were canceled.

A student whose admission was canceled said the office asked the students to share with them all of the memes they sent to their private group.

This student spoke under the agreement that reporters would not use their name.

Some students, such as Luca, were unsure how they felt about the university's decision, she told The Crimson.

She said that if the students had threatened someone with harm, it would be a reason to cancel their admission offer.

This is the second year that Harvard officials have dealt with students sharing offensive messages on the Internet. Last year, students from the Class of 2020 shared racist and sexist jokes in an unofficial Group Me chat. School officials released a statement saying the messages were unacceptable.

Harvard is one of the nation's top universities. It accepted only 5.2 percent of the nearly 40,000 students who applied for the Class of 2021.

Alice Bryant reported on this story for VOA Learning English. Her report was based on information from the Associated Press, The Harvard Crimson newspaper and VOA's Student Union. Kelly Jean Kelly was the editor.

meme - n. an amusing or interesting picture or video that is spread widely through the Internet

chat / chat group - n. a group of people who communicate regularly via the Internet, usually in real time but also by email.

piñata - n. a decorated container filled with candies, fruits and gifts that is hung up at parties or celebrations and hit with a stick by children until it is broken and the things inside it fall out

The Holocaust - n. the killing of millions of Jews and other people by the Nazis during World War II

moral - adj. concerning or relating to what is right and wrong in human behavior

R-rated - adj. (informal use) not meant to be seen by children under the age of 17