Update Required To play the media you will need to either update your browser to a recent version or update your Flash plugin.
By Ashley Thompson
03 November, 2017


The downfall of movie producer Harvey Weinstein has been quick and decisive.

The increasing spread of the so-called "Harvey Effect" has been quick, as well.

It started in Hollywood, when the first accusations of sexual abuse against Weinstein appeared in media reports.

It soon spread to other industries, with the help of the hashtag #metoo. Women, and some men, publicly reported stories of sexual abuse by powerful people. The accused have included famous moviemakers, actors, news media leaders, writers and American presidents.

Most recently, it spread to the British government.

Prime Minister Theresa May this week called for changes in the way Parliament deals with reports of sexual harassment or worse. Her statement was in answer to reports that some British lawmakers had sexually harassed their employees or other people. And on Wednesday, Michael Fallon resigned as Britain's defense secretary, following reports of inappropriate sexual behavior.

Weinstein was among the most powerful moviemakers in Hollywood. His popular, and Academy Award-winning films over the last 30 years, include "Shakespeare in Love," "Pulp Fiction," and "Good Will Hunting."

He ran Miramax Films and later the Weinstein Company with his brother, Bob Weinstein.

On October 5, the New York Times newspaper wrote about Weinstein's reported history of harassing and assaulting women. Several women, including actress Ashley Judd, told the Times that Weinstein used his industry influence to try to gain sexual favors. The accusations dated back more than 30 years. The women said they believed refusing Weinstein and reporting the actions would have hurt their careers in Hollywood.

Judd said in the Times report, "Women have been talking about Harvey amongst ourselves for a long time, and it's simply beyond time to have the conversation publicly." 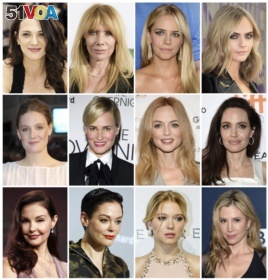 Now, one month later, more than 50 women have accused Weinstein.

Thirteen say he raped them.

Weinstein has been dismissed from the company he created. The Academy of Motion Picture Arts and Sciences has expelled him. The Producers Guild of America, a labor union, did the same. And many actors have sharply criticized him, even those whose careers he helped launch.

Public accusations of sexual harassment or assault do not always lead to decisive action.

In October of 1991, an American lawyer named Anita Hill testified that her former boss, Clarence Thomas, had sexually harassed her. Hill appeared at a Senate confirmation hearing for Thomas, who was a nominee to serve on the United States Supreme Court.

Hill told the senators the incidents had taken place 10 years earlier in her employment at two government agencies.

The Senate debated the nomination and confirmed it. Clarence Thomas remains a Supreme Court Justice today.

However, the event changed how the country defined and discussed sexual harassment.

Hill told the Associated Press on October 14 that she is impressed by the attention being paid to sexual harassment following the Weinstein story. Yet, she said, progress on the issue had been slow.

"This case may be bigger than some in the past, but I think we're kidding ourselves if we think that everything is going to change overnight from one episode, even as big as this one," Hill said.

As the number of Weinstein accusations grew, American actress Alyssa Milano asked her followers on social media for help.

She wrote on Twitter on October 15, "If you've been sexually harassed or assaulted write ‘Me too' as a reply to this tweet." Her aim was to show that sexual abuse is common.

As of October 24, Twitter had recorded more than 1.7 million #MeToo tweets from more than 80 countries.

The hashtag brought strength in numbers, and helped embolden people to share their stories of assault publicly.

More and more women, and some men, continue to accuse well-known and powerful people.

The accusers include Isa Hackett, a producer for the Amazon show Man in the High Castle. She told The Hollywood Reporter trade magazine that Amazon Studios leader, Roy Price, repeatedly asked her for sex in July of 2015. The story was published October 12.

A few days later, Price resigned from his job. 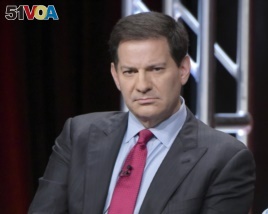 In a CNN report last week, one woman said Halperin told her she would never work in media or politics after she refused to kiss him.

And, earlier this week, American actor Anthony Rapp publicly accused Oscar-winning actor Kevin Spacey of sexual abuse. Rapp said when he was 14 years old Spacey attempted to have sex with him. The accusation was published on the news site BuzzFeed.

Spacey posted a statement on Twitter a few hours later. He said he did not remember the incident and was horrified to hear of it. He said "if I did behave then as he describes, I owe him the sincerest apology...."

Spacey currently stars in the popular Netflix series House of Cards. Netflix announced Tuesday that it has suspended production of the show's final season. It also said it is "deeply troubled" by the reports. Others have since come forward with sexual harassment accusations against Spacey.

Also this week, two women accused actor Dustin Hoffman of sexual harassment. The first, Anna Graham Hunter, described in The Hollywood Reporter several incidents she said took place in 1985, when she was a 17-year-old production assistant.

Hoffman said in a statement he is sorry that, in his words, "anything I might have done [that] could have put her in an uncomfortable situation...It is not reflective of who I am."

Hours later, another woman, writer/producer Wendy Riss Gatsiounis, said Hoffman harassed her in 1991. She said she had been invited to meet with him and a producer to discuss making a play she had written. She said Hoffman made sexual comments and tried to get her to go to a hotel with him. She said when she refused the producer told her they had no interest in her play.

After a second woman came forward with similar accusations, the former president's office explained that because Bush is in a wheelchair, his arms fall near the lower waist of people with whom he takes pictures."

It added that the 95-year old former president has often "patted women's rears in what he intended to be a good-natured manner.

What started in Hollywood may now be playing out in British politics, as well.

Conservative Party leader Andrea Leadsom said that Parliament has "zero tolerance" for inappropriate behavior among lawmakers. She added that changes would be made to how people can report cases of sexual harassment at Parliament.

And International Trade Minister Mark Garnier admitted to asking his assistant to buy sex objects for him in 2010. The story from the former employee was reported in the British newspaper The Mail on Sunday. British Prime Minister Teresa May has called for an investigation into whether Garnier broke the ministerial code of conduct.

On Wednesday, following a series of accusations of inappropriate sexual behavior, Defense Secretary Michael Fallon sent his letter of resignation to May.

May wrote of the growing issue this week. "I do not believe that this situation can be tolerated any longer. It is simply not fair on staff, many of whom are young and in their first job," she wrote.

Ashley Thompson wrote this story based on several reports by the Associated Press and Reuters. Caty Weaver was the editor.

harass - v. to annoy or bother (someone) in a constant or repeated way

boss - n. the person whose job is to tell other workers what to do

kid oneself - v. to fail to admit the truth to yourself : to deceive yourself

suspend - v. to stop (something) for a usually short period of time

inappropriately - adv. done in a way that is not right or suited for some purpose or situation

rear - n. the part of your body that you sit on

intend - v. to have (something) in your mind as a purpose or goal

tolerance - n. the ability to accept, experience, or survive something harmful or unpleasant

conduct - - n. the way that a person behaves in a particular place or situation