US Lawmakers Seek to Permit Religious Head Coverings in Congress

Update Required To play the media you will need to either update your browser to a recent version or update your Flash plugin.
By Kelly Jean Kelly
25 November, 2018


For almost 200 years, the House of Representatives – part of the United States Congress – has barred lawmakers from wearing hats. But this year, voters in Minnesota elected Ilhan Omar to represent them in the House.

Omar, who was born in Somalia and is Muslim, wears a scarf that covers her head.

In answer, some political leaders are calling for a change to the rules so that lawmakers can wear religious headwear during official meetings. The proposed change would enable Omar to wear a headscarf on the House floor. It would also permit lawmakers to wear other kinds of religious headwear, such as kippahs. But it is unclear whether any current lawmaker would do so. 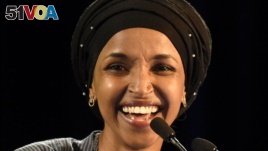 The reason for the ban on hats is mostly related to ideas about respectful behavior. Currently, the rule appears alongside bans on smoking or using small computers, such as iPhones, while lawmakers are meeting publicly.

But Democratic Party lawmakers have suggested a proposal to permit religious headwear. Nancy Pelosi and Jim McGovern were two of the writers of the proposal. They noted to NBC News that this year, voters had elected the most diverse Congress in history. McGovern added the amended headwear rule would permit lawmakers to do their jobs, regardless of their religious beliefs.

The Washington Post newspaper notes that the headwear proposal also denounces some of the anti-Muslim language heard in several election campaigns. The Post added, "It is also notable coming at a time when several U.S. allies in Europe are adopting countrywide bans on face veils."

Kelly Jean Kelly wrote this story for VOA Learning English. Her reporting was based on stories in The Washington Post, Roll Call, and Bustle. George Grow was the editor.

scarf - n. a long piece of cloth that is worn on your shoulders, around your neck, or over your head

diverse - adj. made up of people or things that are different from each other

regardless of - adv. without being stopped or affected by (something)

adopt - v. to accept or approve