Update Required To play the media you will need to either update your browser to a recent version or update your Flash plugin.
By Mario Ritter
05 November, 2017


Space, it turns out, is not a very safe place for electronic devices.

High-energy space particles can cause serious problems for satellites and electronic equipment, even on the Earth's surface. These particles usually come from storms on the sun.

But there may be a way to protect against dangerous high-energy particles by using a kind of radio wave.

The magnetic field around the Earth protects it from the effects of many kinds of high-energy particles. This shield is called the Van Allen belt. It was discovered by the first American satellite, Explorer 1, in 1958.

In the years since, scientists have learned the ‘belt' is really three belts that change in size and shape over time.

Dan Baker is director of the Laboratory of Atmosphere and Space Physics at the University of Colorado, Boulder. His team discovered how these radio waves work. 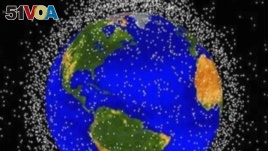 NASA tracks more than 500,000 pieces of space debris as they orbit the Earth, each represented here by a dot. Debris is a danger, but harmful particles may be a bigger danger.

He said scientists have long been trying to find ways to protect against different kinds of space debris and other dangers.

"We've been trying to figure out, ‘how can we most effectively eliminate this debris without causing more of a problem?'"

Tiny particles can cause a lot of damage

Space debris can be something as small as a chip of paint or as large as a rocket booster. Even the smallest pieces of debris can be dangerous because they travel at very high speeds as they orbit the Earth.

Baker said high-energy particles that are smaller than an atom, such as the "killer electrons," also can be a major danger.

"We know, we've observed them to cause very significant problems for spacecraft."

"There are over 1,400 satellites operating in space around the Earth and all of those could be subject to very severe consequences," Baker said.

These kinds of particles can come from human activity; atmospheric tests of nuclear weapons can send out huge amounts of radiation, including high-energy particles.

"Now what is worrisome to us from a political standpoint today is that there are nations, for example, North Korea and others, that may be thinking once again...that this might be an interesting way to mess with modern technology."

Even with the protection of the Van Allen belts, radiation from space can cause problems for modern technology.

Scientists have known for years that something from Earth clears away dangerous electrons from lower levels in the Van Allen belts. But what that was remained unclear.

A bubble of protection

VLF waves have unusual properties for radio waves. They are used to communicate with submarines near the surface of the sea. But they also go up into the atmosphere and beyond.

"So the VLF bubble is made up of these intense waves. These waves act to sort of scatter and scrub the inner part of the Van Allen belt."

John Bonnell is a researcher with the Space Sciences Laboratory of the University of California, Berkeley. He compared the effect of VLF waves to how lightening clears away electrons from the atmosphere. He said while VLF waves might be considered a form of radio pollution, "the likelihood of there being a bad side effect is pretty minimal."

Bonnell said the discovery does not necessarily mean that scientists have discovered a way to make a kind of "space shield." Imagine an energy shield that protects a spaceship from attack in a science fiction movie.

The finding could be an example of how scientists, engineers and astronomers work together to make a remarkable discovery. The findings could lead to "shields" that protect costly satellites, spacecraft and even people in the future as they push deeper into outer space.

Shelley Schlender reported this story for VOA News. Mario Ritter adapted it for VOA Learning English with additional material from NASA. Ashley Thompson was the editor.

particles –n. part of something, such as an atom, not a whole

debris –n. pieces left after something has been broken up

circuitry –n. the workings of an electronic device that govern electrical flow

adherent –n. the state of following a system of beliefs or rules

scatter –v. to force apart and send to different areas