Have We Found the First Moon outside the Solar System?

Update Required To play the media you will need to either update your browser to a recent version or update your Flash plugin.
By Hai Do
05 October, 2018


Scientists say they may have found the first moon outside our solar system.

Many planets are known to exist beyond our solar system. But there has been no confirmation of a moon on the outside.

The possible moon appears considerably larger than Earth and is 8,000 light years away. Astronomers say the object is about the size of the planet Neptune. It orbits a planet that is similar in size to the large planet Jupiter. 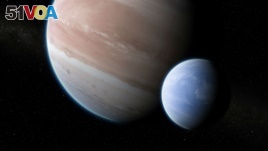 This illustration provided by Dan Durda shows the exoplanet Kepler-1625b with a hypothesized moon. On Thursday, Oct. 4, 2018, two Columbia University researchers reported their results that the potential exomoon would be the size of Neptune or Uranus. The exoplanet, about 8,000 light-years away, is as big as Jupiter. (Dan Durda via AP)

The researchers studied 284 planets discovered by NASA's Kepler Space Telescope. Only one planet, Kepler-1625b, held promise of a possible moon. That planet orbits the star Kepler-1625.

Last October, the researchers aimed the Hubble Space Telescope at the star to study the possibility of a moon nearby.

They were looking for momentary light decreases from the star. The planet itself blocks the light temporarily when it passes in front of Kepler-1625. A second lesser decrease could mean a moon was passing as well.

The astronomers observed such a sign about 3 ½ hours after the planet passed the star.

The researchers also said that the planet passed more than an hour earlier than expected. They noted that a moon could cause the planet to have an unpredictable path. Kipping said that is how the Earth and moon would appear from far away. This planet — or exoplanet — is about the same distance from its star as Earth is from the sun.

For Teachey and Kipping, the best and simplest explanation is that Kepler-1625b has a moon.

The observation period, however, ended before they could see the moon complete its path. To confirm the existence of the moon, the astronomers hope to observe the star again next spring.

Their findings appeared in the publication Science Advances .

Teachey said the discovery of the first exomoon is, in his words, "an extraordinary claim and it requires extraordinary evidence." He added, "We're not cracking open champagne bottles just yet on this one."

If it were an exomoon, it would be about 3 million kilometers from its own planet. The astronomers are also not sure how this possible exomoon might have formed, given its size.

Thomas Zurbuchen is an official with NASA's space science programs. He said in a statement, "If confirmed, this finding could completely shake up our understanding of how moons are formed and what they can be made of."

Hai Do adapted this story for Learning English based on an Associated press news report. Caty Weaver was the editor.

champagne - n. a French wine with bubbles and that people often drink to celebrate special occasions