Have Your ‘Chickens Come Home to Roost?'

Update Required To play the media you will need to either update your browser to a recent version or update your Flash plugin.
By Anna Matteo
16 October 2021

Like many languages, English loves to use animals in expressions. So, today let's talk about chickens! 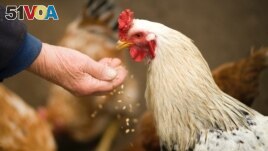 Chickens find themselves in many English expressions. And one relates to our sins or mistakes. Listen to find out more!

For example, if you are an early riser, we might say you wake up with the chickens.

If you are fearful of something, you might be called a chicken.

And if you run around in a crazy way -- or just very busy -- you are said to be running around like a chicken with its head cut off.

But today we are going to explore an expression with a little more meaning.

Today, we talk about our past mistakes and sins – the bad things we have done. We all have them. But the question is: Will they come back to haunt us? Will they cause us problems?

But what does our past sins have to do with chickens?

The answer is found in this expression: "Your chickens have come home to roost."

For a chicken, to roost means to settle down for rest or sleep. For us, however, the expression is not at all restful. When our chickens come home to roost, it means our past mistakes or wrongdoings have come back to cause us problems.

This happened with a man named Alex. He was very good at one thing – lying. He lied to people at work. He lied to every woman he met. He lied to his neighbors and even to his family.

Then one day, he got into serious trouble with the police. He was accused of stealing from his workplace. And this time, he was not guilty. But no one believed him, and no one came to help. After years of lying to people, his chickens had finally come home to roost. He was on his own.

This expression is also used another way. Bad things might happen to you if you wish for bad things to happen to others. When used this way, we say, "Curses, like chickens, come home to roost." A curse is like a wish for something bad to happen to someone else.

Let's say two friends named Karen and Daniel have a falling-out – a big fight. Their relationship is really damaged and probably will not be repaired. When telling the story of the fight to his brother, Daniel says, "I hope Karen loses her job or something else really bad happens to her."

Daniel's brother warns him, "You should be careful what you hope for. You know, curses, like chickens, come home to roost."

And that's all the time we have for this Words and their Stories. Until next time ... I'm Anna Matteo.

Anna Matteo wrote this for VOA Learning English. Susan Shand and Ashley Thompson were the editors.

sin – n. an action that is or is felt to be bad

haunt – v. to eventually cause problems for (someone) as time passes

to roost – v. to settle down for rest or sleep