Update Required To play the media you will need to either update your browser to a recent version or update your Flash plugin.
By Ashley Thompson
03 May, 2018

Lawmakers in the American state of Hawaii have passed a bill banning sunscreens that can harm coral reefs.

If the state's governor signs the bill, Hawaii would become the first state in the country to pass such a law.

The bill would ban the sale of sun care products that contain the chemicals oxybenzone and octinoxate. Scientists say the two substances can harm coral, an important part of the ocean ecosystem and popular with tourists.

The chemicals are found in more than 3,500 sunscreens worldwide, including Coppertone and Banana Boat products. 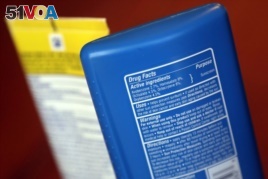 Many sunscreen makers could soon be forced to change their formulas or be banned from selling lotions in Hawaii. Hawaii state lawmakers on Tuesday passed a measure that would ban the local sale of sunscreens containing oxybenzone and octinoxate by 2021 in

Senator Mike Gabbard introduced the bill. He told the Honolulu Star-Advertiser newspaper, "Amazingly, this is a first-in-the-world law."

He added, "Our island paradise, surrounded by coral reefs, is the perfect place to set the gold standard for the world to follow."

Craig Downs is a scientist. His 2015 peer-examined study found that oxybenzone threatened coral reefs. He found that as much as 14,000 tons of sunscreen ends up in coral reefs each year.

He said the Hawaii bill is "the first real chance that local reefs have to recover."

Opponents of the bill question the science.

Tina Yamaki is the president of the Retail Merchants of Hawaii. She said there are still not enough independent studies on the issue to know whether the chemicals cause harm to coral. And, she said, the ban might keep people from buying sunscreen products from local stores.

The American Chemistry Council also opposed the bill, noting concerns over the risks of sun damage to skin.

Sharon Har was one of four Hawaiian lawmakers who voted against the bill.

She said, "Yes, we must protect the environment -- it is our number one resource -- but at the end of the day, studies have pointed to global warming, human contact, coastal development" as other major threats to coral.

Many sunscreen manufacturers already sell "reef-friendly" products. And companies still have some time to sell products that contain the two chemicals; the ban would not take effect until January 2021.

The Associated Press reported this story. Ashley Thompson adapted it for Learning English, with additional materials. Kelly Jean Kelly was the editor.

sunscreen - n. a lotion that you put on your skin to prevent sunburn by blocking out some of the sun's rays

coral reef - n. a long line of coral that lies in warm, shallow water (coral: a hard material formed on the bottom of the sea by the skeletons of small creatures)

paradise - n. a very beautiful, pleasant, or peaceful place that seems to be perfect

standard - n. something that is very good and that is used to make judgments about the quality of other things

introduce - n. to present (something) for discussion or consideration

peer - n. a person who belongs to the same age group or social group as someone else

global - adj. of or about the whole world