Update Required To play the media you will need to either update your browser to a recent version or update your Flash plugin.
By Caty Weaver
15 May, 2015


The 68th Festival de Cannes opened Wednesday in France. Many in the movie-making business consider the 12-day event to be the most important film festival in the world. A director's career can soar after winning the festival's top prize, the famed Palme d'Or.

Just having a movie entered in the festival can mean more money, respect and possibilities for actors, producers and other industry workers.

Hundreds of thousands of people visit the seaside town during the international film festival. There are thousands of movies to see. 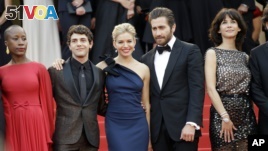 The French film, "La Tete Haute," opened this year's festival. Its English title is "Standing Tall." The movie features a new actor, 17-year-old Rod Paradot. He plays the part of a troubled, violent boy who faces the youth detention system again and again. Paradot stars in the film with French movie legend Catherine Deneuve. She plays a caring judge who tries to save the boy.

Filmmaker Emmanuelle Bercot directed "La Tete Haute." It is just the second film from a woman director to open the "Festival de Cannes."

Critics widely praised the film "Carol" with actresses Cate Blanchett and Rooney Mara who play lovers in the movie.

Other films up for the Palme include the Japanese picture, "Our Little Sister," the French film, "Valley of Love," and "Mountains May Depart," a movie from China.

A reminder of terrorist attack at festival

An ugly cartoon drawing of Catherine Deneuve at Cannes was the cover of the French satirical magazine Charlie Hebdo this week. The cartoon made fun of the 71-year-old actress' weight and the strong security presence at the festival.

Deneuve seemed to deal with the insult with ease. "I hope it's funny," she said, "Even if it's nasty."

The deadly attack by Muslim extremists on Charlie Hebdo's Paris office in January influenced security plans at Cannes. There is always a strong police presence at the festival as it attracts the rich and, as a result, thieves.

But, this year, increased fears of terrorism led to expanded security. Hundreds of local and national police, riot forces, and other agents are on guard. Hundreds of video cameras are also in place.

As always, the press is taking pictures and providing commentary on the comings and goings of the stars. Salma Hayek met with the press in a sleek black and red dress by designer Alexander McQueen.

Hayek is at Cannes to support her new film "Tale of Tales." Matteo Garrone directed the movie, which is based on 17th century Italian fairy tales. It is one of 18 films competing for this year's Palme d'Or.

Cast member John C. Reilly also met with the press for "Tale of Tales." He dressed for the seaside in a summery suit and hat. Reilly is also in two other films being presented at the Festival de Cannes.

Last year, the Palme d'Or went to the Turkish film, "Winter Sleep." This year, who knows? But two directors with a winning history are co-presidents of the 2015 Cannes prize jury. American brothers Joel and Ethan Coen won the Palme d'Or in 1991 for their film "Barton Fink." Their movie "Inside Llewyn Davis" won Cannes' second prize, the Grand Prix, in 2013.

sleek – adj. straight and smooth in design or shape

Have you ever been to an international film festival? Or has one ever been held in your town? Tell us about it. Post your thoughts in the comments section.