Update Required To play the media you will need to either update your browser to a recent version or update your Flash plugin.
By Bryan Lynn
11 June, 2019


The success of an American television show about the Chernobyl nuclear disaster has led to a sharp increase in people seeking to visit the area.

The HBO miniseries "Chernobyl" examines the 1986 accident that took place at a nuclear plant in the town of Chernobyl, in the former Soviet republic of Ukraine.

Chernobyl was the world's worst nuclear accident. A reactor at the plant exploded and caught fire, sending huge amounts of radiation into the air.

The accident killed 31 people immediately and forced tens of thousands to flee. But Soviet officials decided not to order an evacuation of the surrounding areas until 36 hours after the accident.

The final number of those killed by radiation-related illnesses such as cancer is still debated.

But the poor conditions in Chernobyl have not stopped people from wanting to see the disaster remains for themselves.

One Chernobyl tour operator has reported a 40-percent rise in trip requests since the HBO series began in May. English-language tours in the area usually cost about $100 per person. 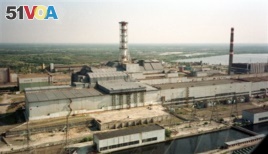 FILE - In this July 23, 1998 file photo, a chimney towers over the sarcophagus that covers the destroyed Reactor No.4 at the Chernobyl nuclear power plant.

Sergiy Ivanchuk is director of SoloEast tours. He told Reuters his company saw a 30-percent increase in tourists wanting to visit the area in May 2019 compared with May 2018. And visitor requests to Chernobyl for the months of June, July and August rose about 40 percent since the release of the HBO show, Ivanchuk said.

Yaroslav Yemelianenko, director of Chernobyl Tour, said he is also expecting an increase of 30 to 40 percent because of the show. His company offers a special tour of places shown in the series. This includes the place where local officials decided not to order people to leave the area right after the explosion.

Some visitors choose to take day trips into Chernobyl from the city of Kiev, 120 kilometers away. The visitors have the chance to see structures that honor victims of the tragedy. They go by vehicle through empty villages and get the change to have lunch at the only operating restaurant in Chernobyl. Visitors can even go see the exploded reactor number four, which sits underneath a 105-meter-high metal cover.

"Many people come here, they ask a lot of questions about the TV show, about all the events," tour guide Viktoria Brozhko told Reuters. "People are getting more and more curious."

Brozhko said she believes the area is safe for people to visit. "During the entire visit to the Chernobyl exclusion zone, you get around two microsieverts, which is equal to the amount of radiation you'd get staying at home for 24 hours," she said.

Craig Mazin is the creator of the ‘Chernobyl' miniseries. He says his first visit to the area was a moving experience. "I'm not a religious man, but that's as religious as I'll ever feel," he said on an HBO podcast. "To walk where [the victims] walked felt so strange, and also being under that same piece of sky, you start to feel a little closer, in a sense, to who they were," Mazin added.

apocalyptic – adj. showing or describing the destruction of the world

tour – n. a visit to and around a place, area or country

curious – adj. wanting to know or learn about something

exclusion – n. a situation in which someone is not permitted to enter a place

podcast – n. a recorded show that can be listened to on a computer or digital device